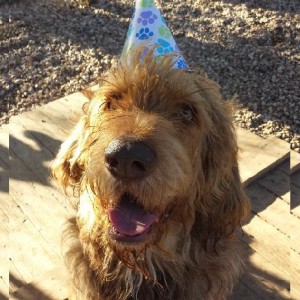 The Hunter’s C litter turned two this past March but back in September of 2013 while only 17 months old Hunter’s Taking Moonlight Chances aka Josef won his Championship at the Otterhound Club Specialty. His owner was a bit surprised when she was congratulated as she didn’t realize that he had just earned the final points for his championship.

We talked about Hunter’s Harvey Corrigan getting his Championship back in July. That gave the C litter two champions.

While Hunter’s Laird Chilton aka Chili didn’t get his tracking title at the Otterhound Specialty he did manage to get it soon after. He is following in his father’s foot steps as Sonsie’s Laird Moseley has several tracking titles among others.

Hips are a big issue in Otterhounds. Like most of the larger breeds Otterhounds are prone to hip displasia. The Orthopedic Foundation for Animals or OFA evaluates the hips of all dogs submitted to them and ranks them. The best is Excellent, then good, fair, borderline, mild, moderate and severe. The x rays are taken and submitted after the dog is two.

Chili had his hips done in May and in June the report came back. Hunter’s Laird Chilton – OFA Excellent! This made him the second Otterhound recorded with excellent hips.

Cheyenne and Clara had their hips done in June and the reports came back in July. Hunter’s Sunny Cheyenne did not fair so well. She is OFA Moderate. Hunter’s Dame Clara however was OFA Excellent! She became the third Otterhound to get an excellent hip score.

Then Harvey had his hips done in July and the report came back in August. Hunter’s Harvey Corrigan is OFA Good.

There were celebrations all around.

The year is not over yet and we have hopes of more news before the Hunter Otterhound C liter turns three.