On March 23, 2020 the Hunter G Litter of Otterhounds turned three weeks old. They are progressing fast. While they are gaining weight at about a tenth of a pound a day they are growing quickly.

They went from staggering around the whelping box at two weeks to charging around it by three weeks. They have discovered the entrance and started sticking their heads out. Momma Dawn has started spending more time away from them. By Saturday they had become so demanding that Dawn would only stay in the box for a few minutes at a time.

This meant that they were doing a lot of crying because they weren’t being allowed to nurse until they were full. Around two o’clock we fixed their first bowl of puppy mush. While some took to it like gang busters others were not interested. Most of the food wound up on them rather than in them. After a good (?) bath from mom they settled down for a long nap.

By Sunday night they were following mom out of the whelping box so a second slat had to be added. 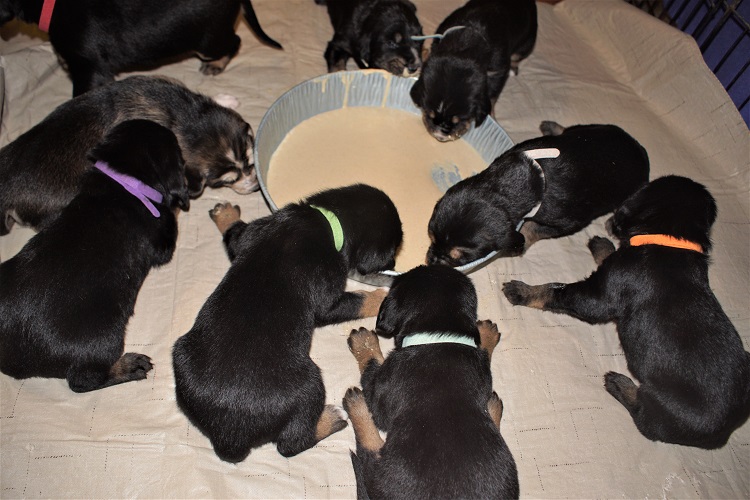 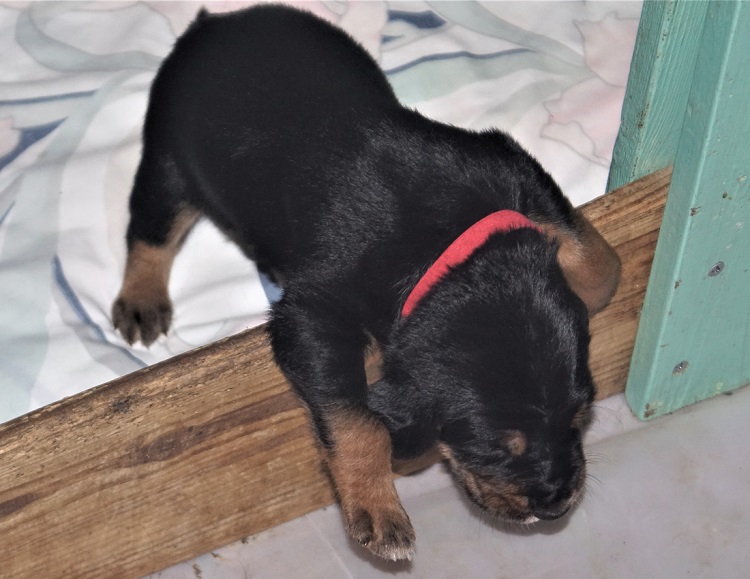 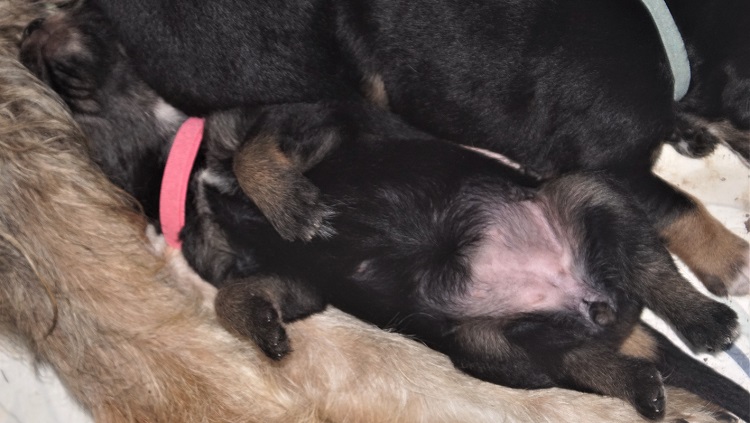 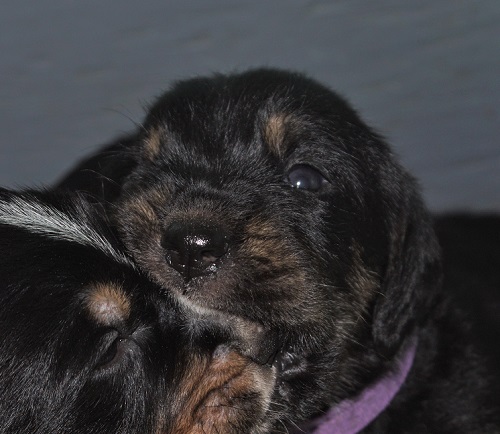 Pup one is now named Hunter’s Graham Evening Star. While Graham wasn’t the first out of the box it didn’t take him long to try climbing out. On March 23 Graham weighed 3.2 pounds.

Pup two Glory looks very serious some times while at others she can really chill out. She stretched out on her back against her mom’s legs showing her pink tummy. On March 23 Glory weighed 3.2 pounds.

Pup three Gem like Glory has two moods. Some times she is somber and quiet but the camera caught her playing with her brother (or is that trying to eat him). On March 23 Gem weighed 3.2 pounds. 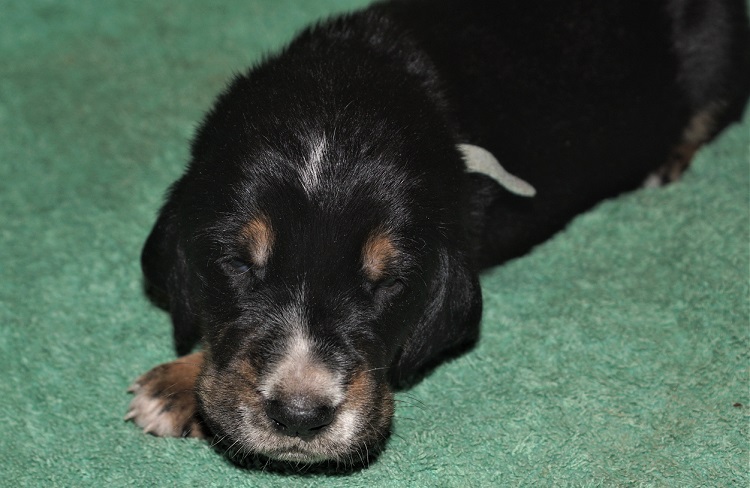 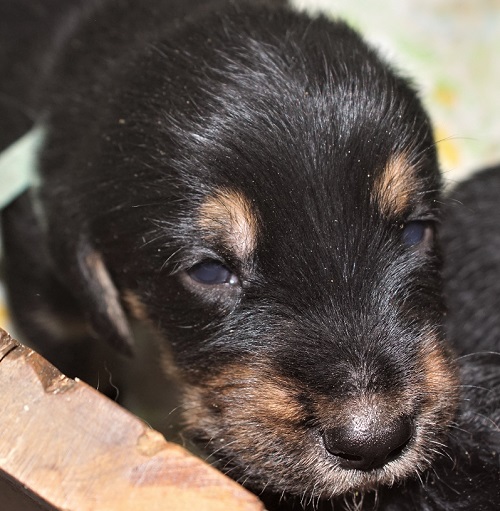 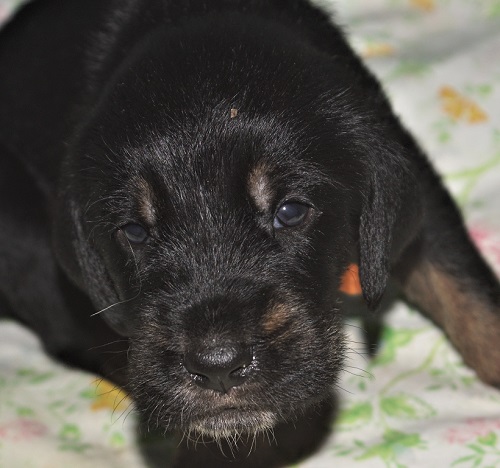 Pup four Glen was the first to check out mom’s food bowl. He was the second to climb out of the whelping box. His white marking are still distinct. On March 23 Glen weighed 3.0 pounds.

Pup five is now named Hunter’s Grady Otterbe Quick. Grady didn’t take to solid food as readily as the others but got there eventually. He tends to look at the camera whether out of attention or poor sight its hard to tell. On March 23 Grady weighed 3.2 pounds.

Pup six Gerald managed to wind up out of the whelping box on the 18th. It isn’t known if he climbed out or hung onto mom and was pulled out. When mom left he started crying. On March 23 Gerald weighed 3.2 pounds. 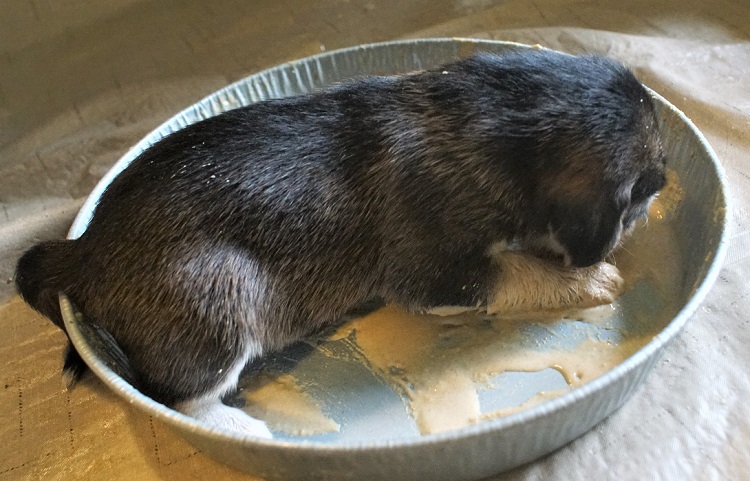 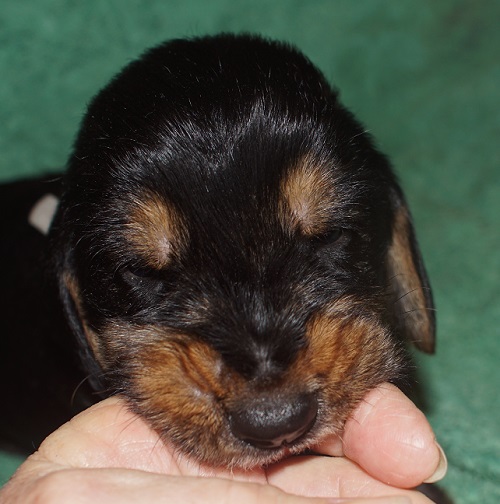 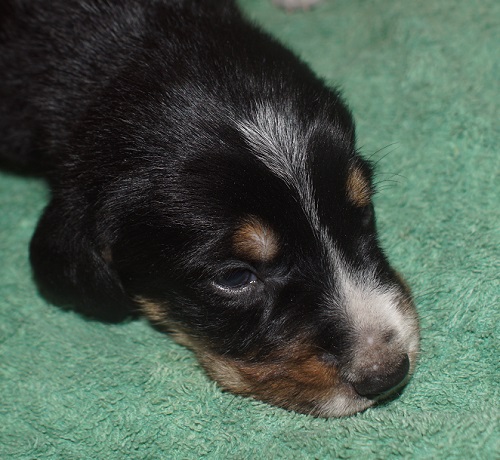 Pup seven Georgia dove right into solid food literally. She started eating on one side and ate her way across. Once the others finished she lay in the bowl cleaning up the left overs. On March 23 Georgia weighed 3.2 pounds.

Pup eight is now Hunter’s Gary Otterly Bold. He decided to use mom as a climbing wall and climbed over her head. For his three week picture he chose to check out how fingers taste when not hiding from the camera. On March 23 Gary weighed 3.4 pounds.

Pup nine Gordon also took to solid food right away. Later he had to put up with Gem chewing on his nose. He was one of the first to check out the wee wee papers added to the box. On March 23 Gordon weighed 3.2 pounds.