The H Litter ten week Otterhounds went to the vet on December 7. They went in for their second round of shots.

While there they had blood drawn for the health study and CHIC DNA Repository. They also had swabs taken for the Glanzman’s test. They were mostly good about it though a couple of the girls would not be still. They all enjoyed visiting with the veterinarian and staff.

The H Litter Otterhound Puppies love to eat and finish off their meals in a hurry. Once finished with meals they are eagerly looking forward to a treat ball as a chaser :). They get up around six AM and are eager to get fed and take care of business. Then it is play time.

They play anywhere from an hour to two hours before they collapse for naps. Then it is up again for lunch between eleven and twelve and repeat. The next meal is around four thirty it is somewhat larger as we have been cutting back on the fourth meal. Soon they will switch to three meals a day. They go to bed between nine and ten and after a good wrestle they settle down and sleep through the night. They will soon be ready for new homes. 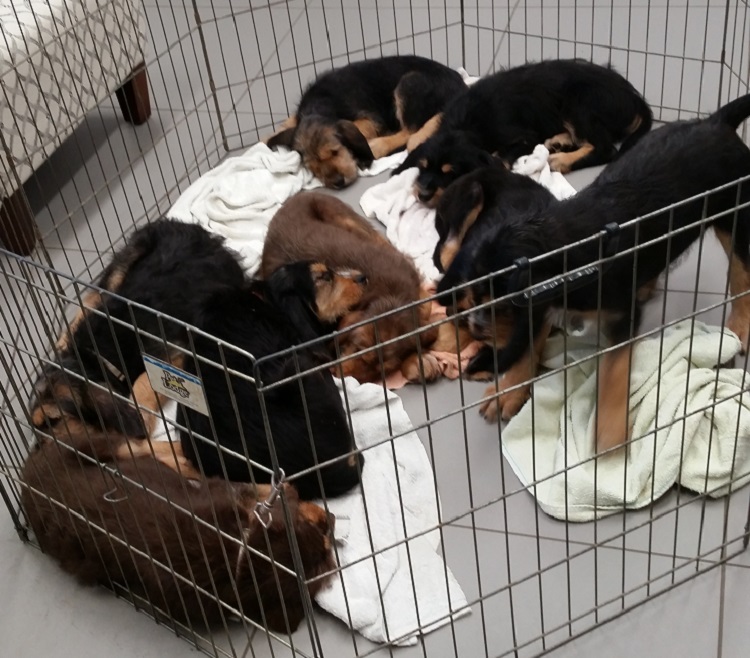 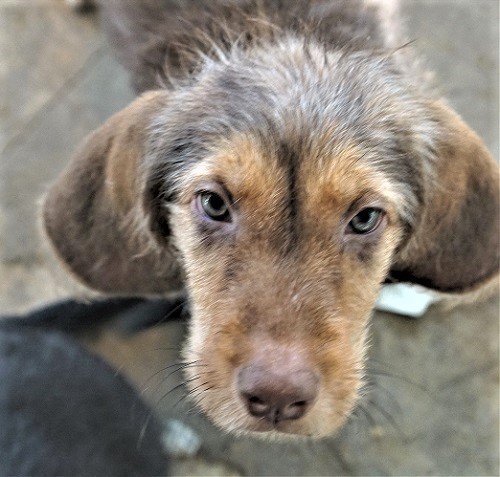 Puppy one Helena is lively and friendly. She wants attention but has stopped howling to get it.

Helena does stand up to get closer to you. Her eyes have lost the blue tent and are now closer to the light color they should be. On December 7 Helena weighed 18.3. 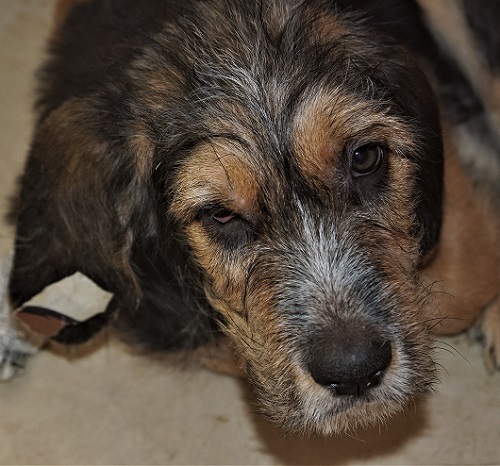 Puppy two Hiram is the biggest still. He loves his food and can be food aggressive on occasion.

While Hiram doesn’t like being cuddled he wants attention. He can be very laid back one minute and in the middle of a fight the next. On December 7 Hiram weighed 20.7 pounds. 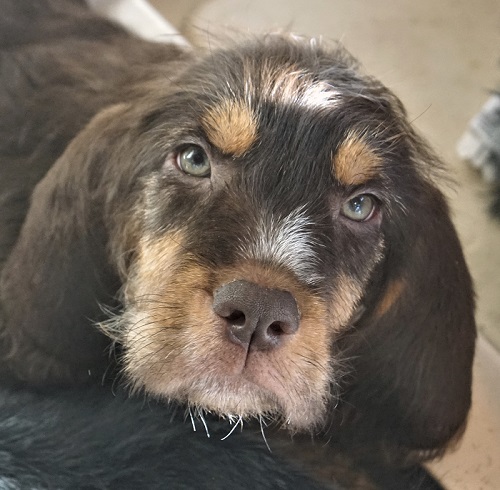 Puppy three Happy has turned into a real wiggle worm. He can’t stay still unless asleep. His eyes have turned the light color normal for a liver color.

Happy lives up to his name as he is generally a happy puppy and while he loves attention he just can’t be still. He weighed 14.6 pounds on December 7. 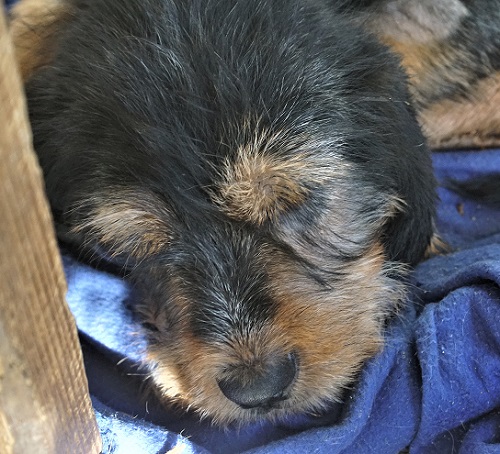 Puppy four Hondo has become a sweet fellow and likes attention. However he can hold his own with the others.

Someone pulled off his collar and he helped chew it up. He is eating well and gaining weight. Hondo weighed 17.2 pounds on December 7. 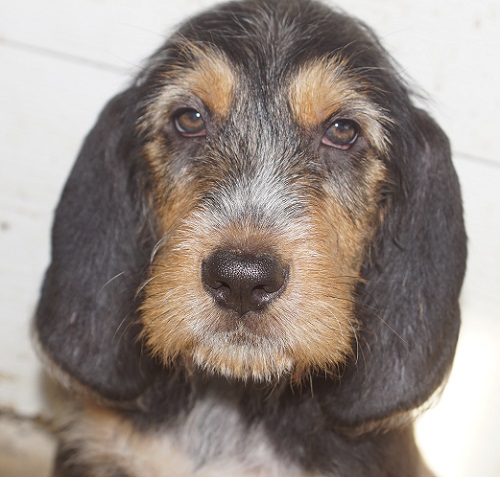 Puppy five Henrietta really wants attention. She will get up even when everyone else is sleeping if she thinks she will get attention.

Henrietta loves her food and has developed a large waist. She also lost her collar. On December 7 Henrietta weighed 20.1 pounds. 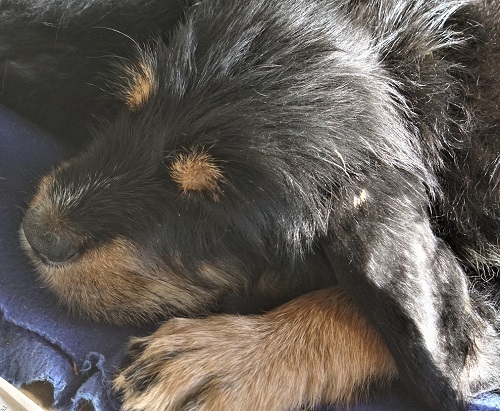 Puppy six Harriett is a sweet girl who likes being alone most of the time. When it comes to food or fights she is in the thick of it though. She likes attention but not necessarily to be held. Harriett weighed 17.8 pounds on December 7. 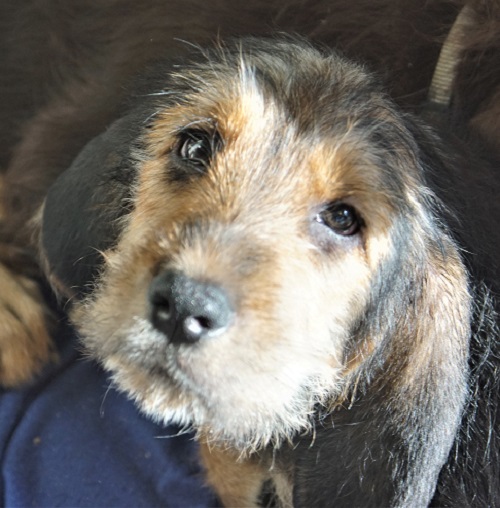 Puppy seven Harmony’s tail never stopped wagging all through her check up, shots and tests. She is a happy girl.

If something is going on she will be involved. She likes attention but can only be still for a minute or two. On December 7 Harmony weighed 16.8 pounds. 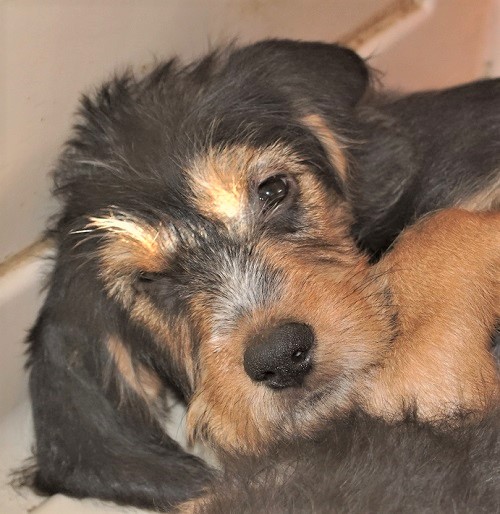 Puppy eight Holly looks so much like Henrietta it is hard to tell them apart but Holly is not as eager for attention.

She is much more interested in playing. She likes to get into things and can be a handful at times. Holly weighed 19.7 on December 7.