On November 30 the H litter Hunter Otterhound Puppies are Nine Weeks. They have grown a lot since the last update.

They are completely weaned and eating four meals a day plus snacks. Since they are bigger they are now fed in two bowls. But they still eat out of one bowl until empty then start on the other.

They generally sleep through the night and very seldom mess their bed. They still haven’t gotten the hang of wee wee pads. More often then not they play with the pad and wet the bed. They begin their day around six o”clock. But then it is too cold and damp for them to go outside, so the pups are staying in a pen on the enclosed back porch. While this pen gives them more room than their whelping box; they would prefer getting outside.

They all love attention and will crowd around when we go into their pen. They spend about twenty minutes wrestling after eating. Then it’s naptime for about thirty minutes before they are up and at it again. Even when they are sleeping, the sound of their food bowls has them rushing to the gate. 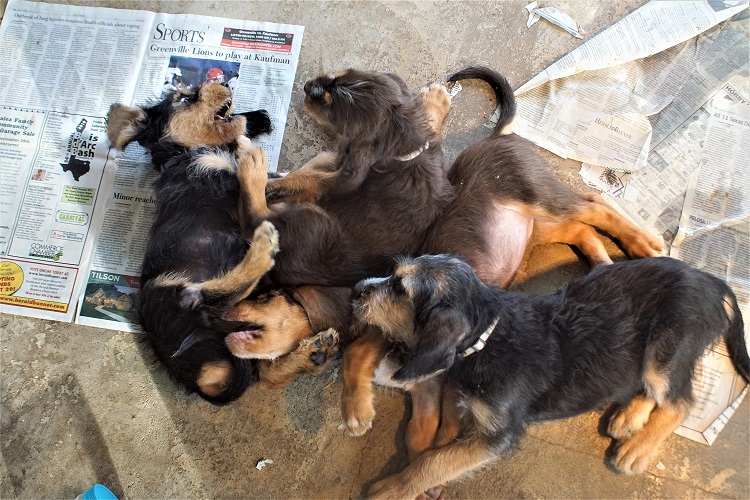 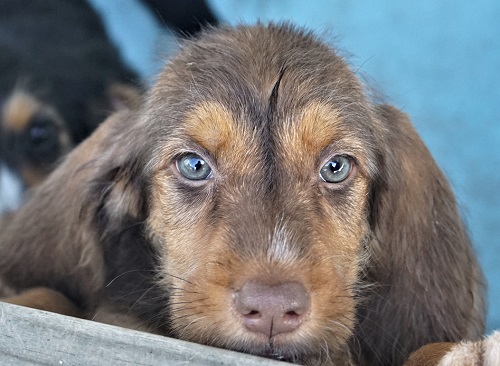 Puppy one Helena is a bit less vocal now. Her tan markings have merged into a tan mask and her lighter eyes still look blue. She has the longest ears of the bunch.

While she can be playful, her expression is generally somber. She likes attention and will stand up to get it. On November 30 she weighed 15.5 pounds 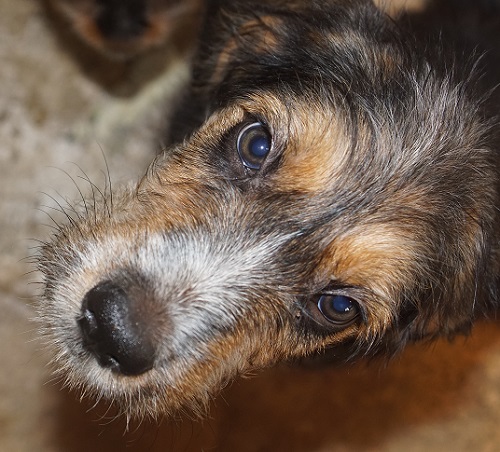 Puppy two Hiram is now the largest. While he isn’t slow to get into fights he seldom starts anything. He is something of a loner.

He generally has a sweet disposition but can put up a fight when he doesn’t want to do something. On November 30 he weighed 17.7 pounds. 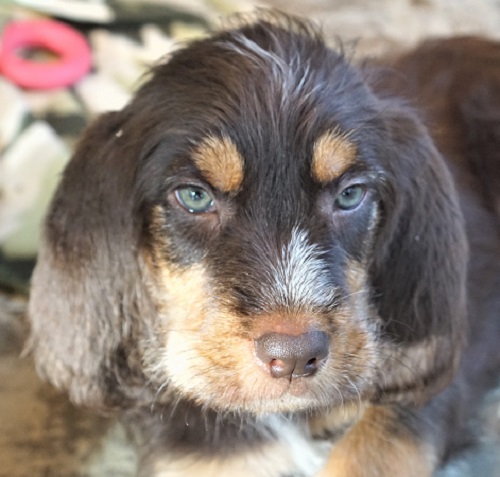 Puppy three Happy is determined to not to let his size count against him. He is generally in the middle of things.

He is so full of energy most of the time that he is hard to hold on to. Sometimes he looks so serious and at others he lives up to his name, happy. He weighed 12.1 pounds on November 30. 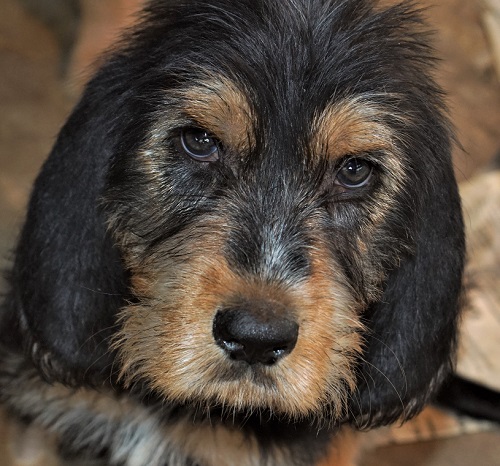 Puppy four Hondo has become more affectionate. He went through a spell of not eating, so he is no longer the largest but he seems determined to catch up.

His tan markings have begun to frame his face and he generally has a somber expression. He likes attention and can be quite loving. On November 30 he weighed 13.5 pounds. 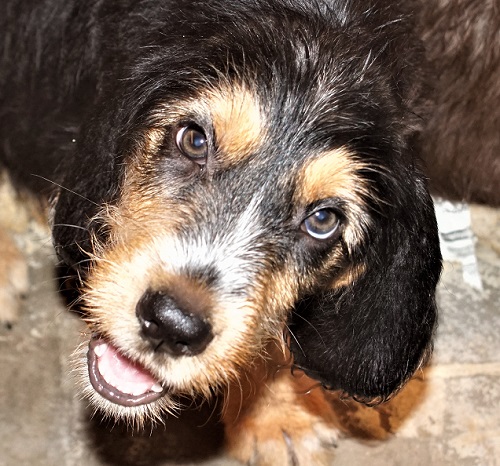 Puppy five Henrietta is still into things. She loves shoe laces and will hang on to my laces while I am trying to walk.

She will stand up on my legs trying to get attention. She turned into a little butterball for a bit but is now slimming down. She weighed 16.0 pounds on November 30. 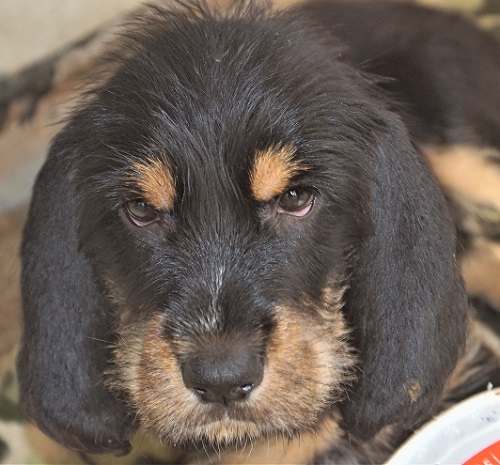 Puppy six Harriett is still somewhat shy and keeps to herself most of the time. When she decides to get into it with the others she can hold her own. Usually she is very loving.

Her tan eye spots have remained spots while her eyes have turned brown. She likes chewing on the yogurt cups. On November 30 she weighed 14.3 pounds. 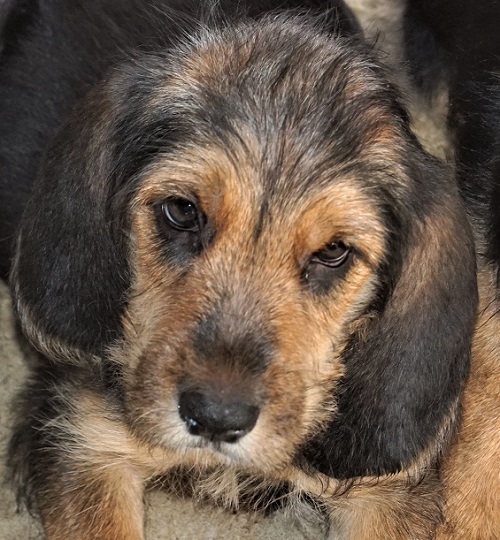 Puppy seven Harmony is still into everything. When Allen had to move a ladder out of their pen she clung to the bottom step and wouldn’t let go even when the ladder moved.

She is going through a pudgy stage such that when her paws are up on the fence she has a little round belly. She was 14.4 on November 30. 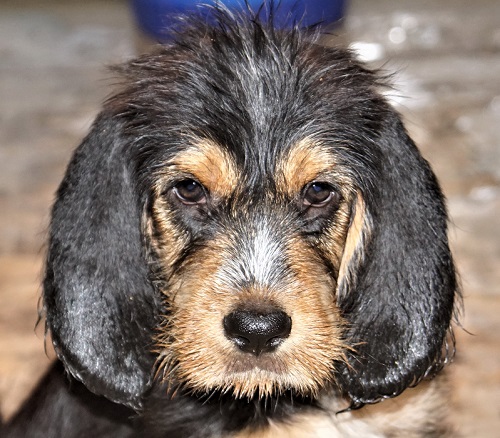 Puppy eight Holly is now the largest female. Not only does she weigh more than the other girls, she is also physically larger than all the others.

She is also strong so when she doesn’t want to be held she can be a handful. She likes attention and can be very sweet. She weighed 16.9 pounds on November 30.