This week has been a week of firsts for the Otterhound puppies.  On Saturday they received their first solid food.  This went over well and they readily took to their second feeding. However it was a lot messier than the first one and as a result they got their first bath.

On Sunday they went outside for the first time.  The Otterhound Puppies enjoyed sleeping in the fresh air.

Read below or click the Slider to see larger Otterhound Puppies 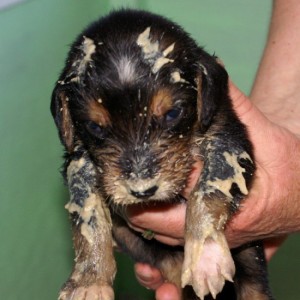 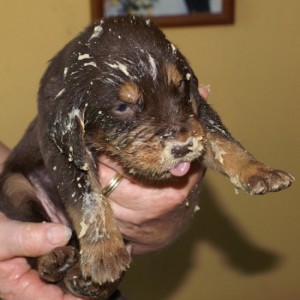 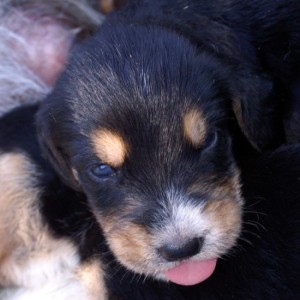 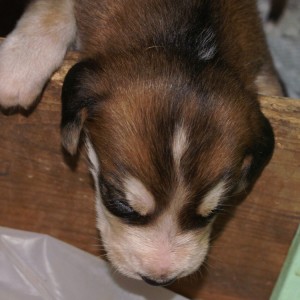 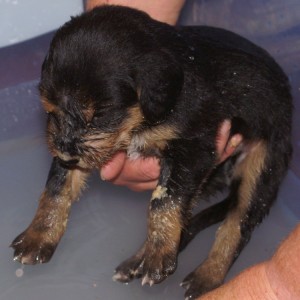 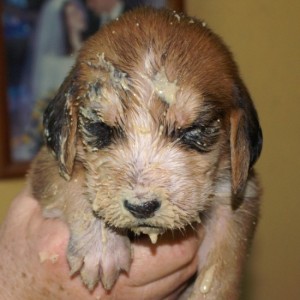 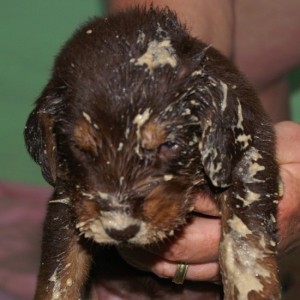 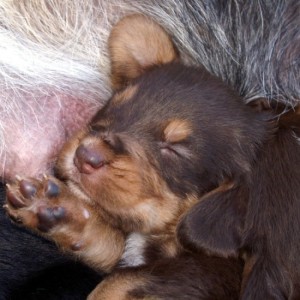 While pup one is still smaller than the other males he is growing steadily. He is now up to 2.4 pounds. He is lively and stands up to the bigger pups. As you can see he really got into his second solid food.

Pup two is the only liver male and the largest of the pups. He is now 3.1 pounds. His tendency to hog the choice nursing spot seems to have carried over to the solid food. While he got a lot on him, he also got a lot in him.

Pup three is the only black female. She appears to be giving the camera a raspberry but she probably can’t see as far as the camera yet. She is now 2.7 pounds.

Pup four gets around pretty good. He found the entrance to the whelping box and tried to climb out. There is now a another board in the door. He is now 3.0 pounds.

Pup five really got into his second solid food in more ways than one. Here he is getting his first bath. He didn’t object but wasn’t happy about it either. He is now 2.9 pounds.

Pup six is very photogenic. Here she looks like a diva posing for her picture. She is already play fighting with her siblings. She is now 2.6 pounds.

Pup seven while not the biggest is generally the first and last to eat. He took to solid food right off and even though it looks like he took a header into the dish he ate more than his share. He is now 2.9 pounds.

Pup eight is the largest female. She looks like she is wearing as much solid food as she ate but her tummy says she ate plenty. She is now 2.9 pounds.

Pup nine is still the smallest female but not for lack of trying. When they got their first solid food she waded right through the middle of the bowl. She was so full she almost couldn’t get over the edge of the bowl. She is now 2.4 pounds.