On the 16th and 17th of October we went to the Tyler Kennel Club show with six Otterhounds. On the 16th we had two boys entered in Puppy 12 to 18 months. Barclay won Winners Dog over Bexar giving him one point.

Bonney and Star were entered in American Bred. While Star showed better than she ever had, Bonney won.  Then Pris and Quick were in Open and Pris won.  Bonney then took Winners Bitch.  Since there were four females entered this gave Bonney her first three point major.  When she went up against her brother, Barclay won Best of Breed and Best of Winners.  This gave him his first three point major as well.

On the 23rd and 24th we went to the Bell County Kennel Club show.  On the 23 there were four males entered.  Barclay and Bexar went up against two other males.  Barclay won Winners Dog giving him his third three point major and his Championship.

Bonney was the only female entered so naturally took Winners Bitch putting Barclay and Bonney in Best of Breed against each other.  Bonney won Best of Breed and Best of Winners giving her her third three point major and her Championship.

It was almost as if they had compared notes and knew exactly who needed to win what to get their Championship. Barclay went into the show needing one point for his Championship and won three. Bonney needed three points and the only way for her to get them was to win Best of Winners and she did.

On the 24th Bonney was again the only female and took Winners Bitch.  Barclay and Bexar both lost to their father Ch. Lonestar Abbott. 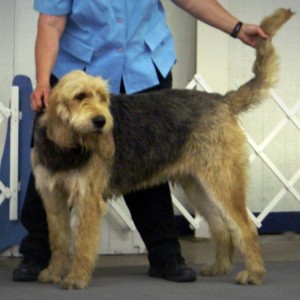