We do plan to breed again; however, we are uncertain at this point in time when that will be.

Things have been hectic here at Hunter Hounds Otterhounds. We planned to breed Hunter’s Dame Clara when she came in heat in March. However Otterhounds aren’t known for following plans. Clara’s older sister came in heat in February followed by Cheyenne and shortly there after Clara.

We rushed around getting everything lined up for breeding. We contacted the owner of our finalist in the otterhound stud search. CT Ch. Riverrun Finnegan VO CGC NAP NAJP VOX was ready when the reproduction vet said Clara was ready.

The weather was not on our side. With all the snow and ice in Illinois we worried that there would be problems on that end. The problems were here. Progesterone test results were delayed due to ice and snow (in Texas no less). One test even got lost so another had to be done delaying things again. 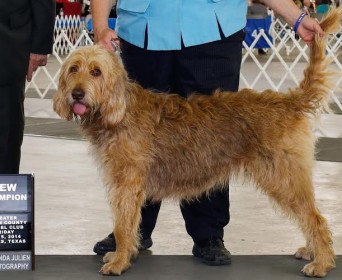 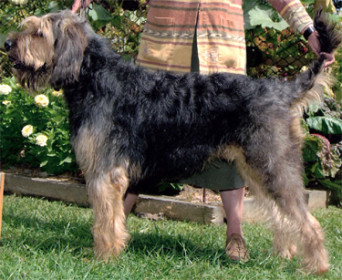 When the numbers were right the semen was shipped. However it was also delayed by weather. In spite of the problems. Otterhound Ch Hunter’s Dame Clara was bred to Otterhound CT Ch. Riverrun Finnegan VO CGC NAP NAJP VOX on March 3 just three days before her third birthday.

March 30th Clara went in for an ultrasound. The vet confirmed that the breeding was successful and there are multiple puppies. Sometime around the first week of May we hope to welcome the next generation of Hunter Otterhounds.

Hunter Otterhounds at Meet the Breed!

On March 22 we took four of the Hunter Otterhounds to the Fort Worth Kennel Club show for Meet the Breed.
Everyone had a good time meeting people and leting them see Ottehounds up close and personal.

Bonney wanted to shake hands with everyone while Barclay was ready with kisses. Clara was happy to see everyone and even Cheyenne relaxed enough to talk to a couple of people. All in all it was a great day and quite a few people met Otterhounds for the first time. 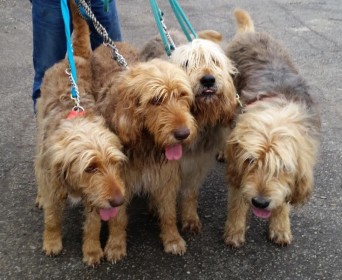