March was a good month for Quick.

We went to the Fort Worth show March 22 and 23. We had four girls entered–three of ours and one we are keeping for a friend.

Quick, Pris and our visitor Star were entered in the open class. Star is new to showing so it was between Pris and Quick. Both of them showed well but Quick had a bit more spark and took winners bitch. That gave her two points and her championship with a point to spare. She lost best of breed to Nicky who was in a show mood.

On Sunday Quick was really ready to show and took winners bitch again. When she went up against Nicky for best of breed she was prancing and happy. She easily won best of breed. That gave her another major and three more points giving her four majors and 19 points. 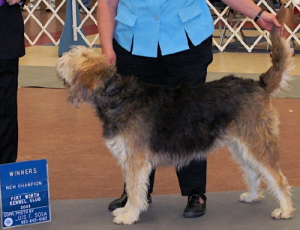