On the 8th and 9th of January we went to the Nolen River Kennel Club show. Quick and Pris were in Open Bitches, Star was in American Bred and Bexar was in Open Dogs.  On the 8th Quick won Winners Bitch and Best of Opposite Sex. Bexar lost to his brother Badger and their father Lonestar Abbott took Best of Breed.

On the 9th Pris took Winners Bitch and Best of Opposite Sex. Bexar beat his brother and gained a point. Abbott again took Best of Breed and Bexar got Best of Winners.

The weather started out rainy on Sunday and proceeded to turn nasty. A lot of the handlers left early so we stayed to help friends who were short handed. By the time we left snow was falling.

As we drove home the snow got heavier and the closer we got to home the worse it got. When we finally arrived home there was five or six inches of snow covering a half inch of frozen rain. If you live up north that doesn’t seem like a lot but here in Texas that’s enough to cause real problems.

The snow didn’t bother the dogs in the least. We took them for a walk around the pond and they had a great time. The two males were on leashes because three of the girls were in heat.

If you look close you can see all ten Otterhounds, our lab mix and Allen. The otterhound facing the camera is Bonney and ELee our lab mix is just behind her. Then from left to right they are: Star, Nicky, Blessing, Pris, Blossom, Barclay, Allen, Bexar, Quick and Abilene. 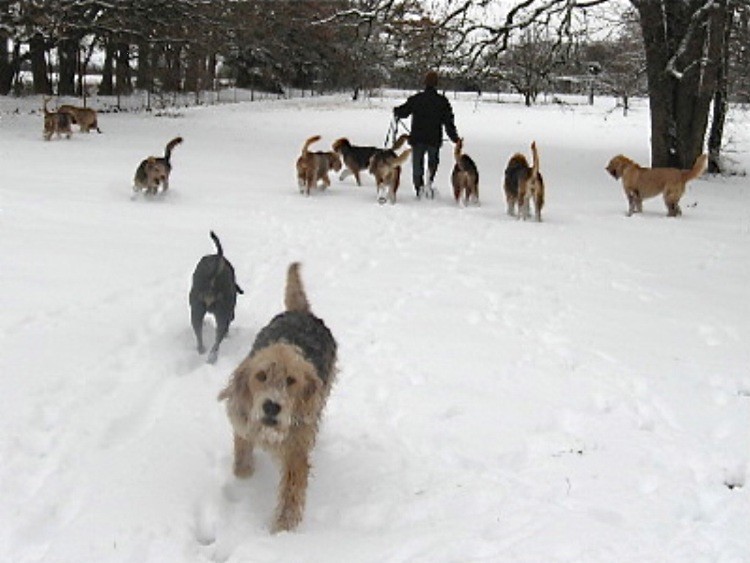 The Pack in the Snow