The pups are seven weeks old and spending most of their time out side.

They had their first experience with collars over the weekend.  There was no problems with wearing a collar but they did like to pull on the other collars.  They also got their first cookies.  That was a real treat.  They played with their Skinneeez beaver and rabbit until they were exhausted.

While they are a long way from being house trained they have learned not to potty in their box.  One even climbed over the side to potty when they were left in their box for three hours. What is surprising is he/she climbed back into the box.  They have just discovered that they can bark and take great pleasure in it. 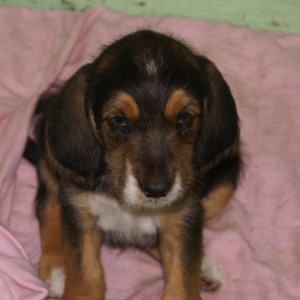 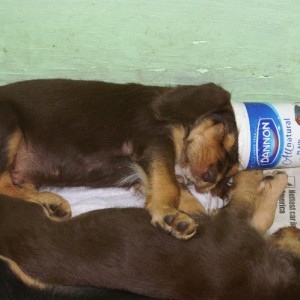 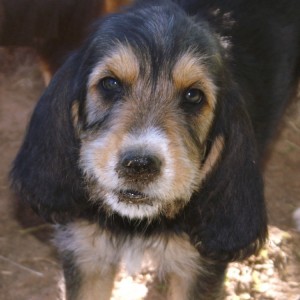 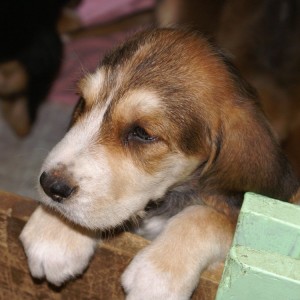 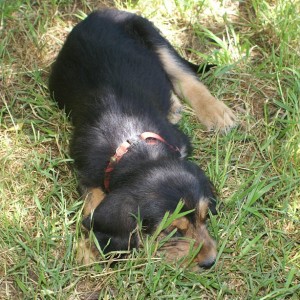 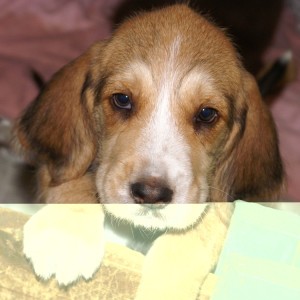 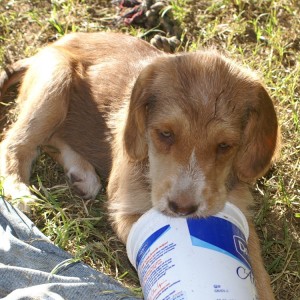 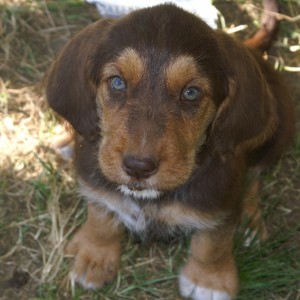 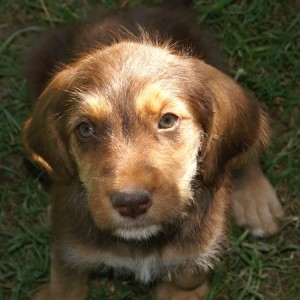 Pup one is 10.9 pounds. He and his sibling spent some time playing with their rabbit toy and he is exhausted. After a brief nap he was ready to go again. He is independent and usually the last one in or out. 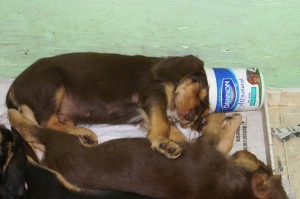 Pup two is 13 pounds. He was sleeping when he wound up with their yogurt cup on his head like a hat. He didn’t mind wearing a collar and didn’t give the others too much grief about theirs. He really liked the cookies and took his off to savor.

Celina is 11.3 pounds. She is a real dynamo most of the time but when she wants to cuddle she is very affectionate. Here she is enjoying a cookie. She got stuck under the dog house and hollered for help. We had to lift the house and pull her out.

Pup four is 13.1 pounds. He is a live wire and into everything. He wants attention and then wants to fight. Here he is trying to get out of the whelping box and being rather vocal about it. 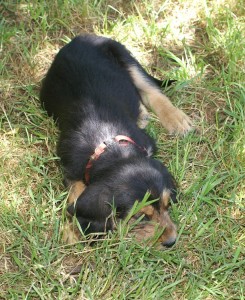 Pup five is 13 pounds. He readily took to wearing a collar. However he saw the leash as something to play tug o war with. Especially when it was attached to someone else. He has a lovely face and very nice ears.

Celeste is a 11.4 pounds. She is a bit of a handful. When she wants attention she demands it. She loves to play and was enjoying the empty yogurt cup. She had a ball with the rabbit toy as six of them played tug o war with it.

Pup seven at 14.2 is the largest. He can be very sweet and gives you a big eyed stare when he wants attention. He gets right into what ever is going on. He was the last one holding the rabbit toy but gave it to me without a fight. 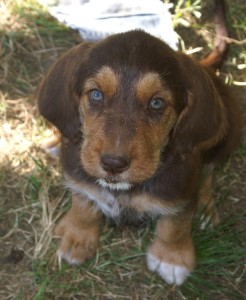 Cheyenne is 11.6 pounds. Her ears were a bit slow to develop but now hang nicely to her nose. She likes to cuddle if no one is looking but if the others see she has to get down an prove she is equal to any of them.

Clara is still the smallest at 9.4 pounds. She has become such a fireball that we jokingly call her demon Clara. I think she tries so hard because she is so much smaller. Here she seems to be saying “You looking at me”. She can be sweet but prefers to go, go, go.