The pups are six weeks old and had their first shots on the 18th.

On Saturday they went into the puppy pen for the first time. The pen is 30 feet by 40 feet.  They had a blast running all over the place exploring everything.

They prefer staying out in the puppy pen and even stayed under the dog house when it rained. 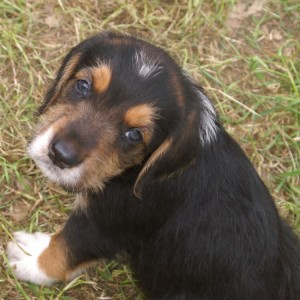 1 Comet Looking at the Camera 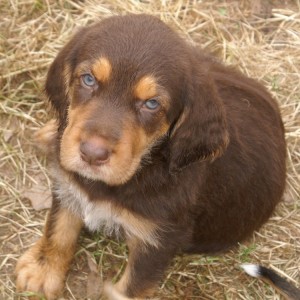 2 Corrigan Looking at the Camera 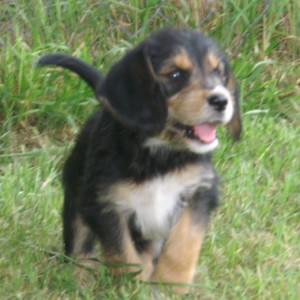 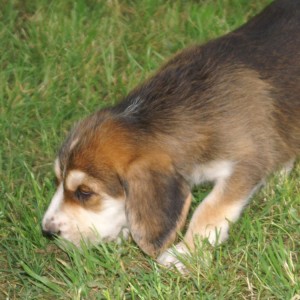 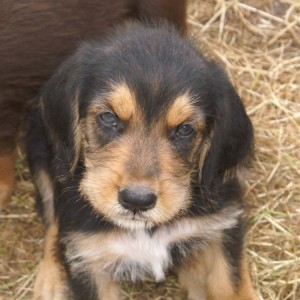 5 Clint Looking at the Camera 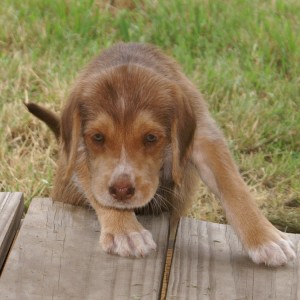 6 Celeste Can do it 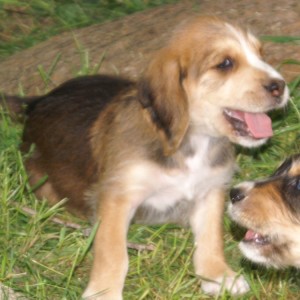 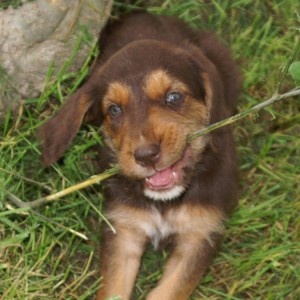 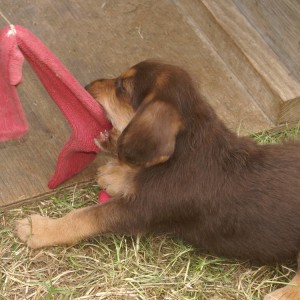 Pup one is up to 8.8 pounds, a whole pound more than his little sister. Here he is looking up at the camera with a mournful expression. He is outgoing most of the time and doesn’t want to be held. When he is tired he likes to cuddle.

Pup two is the second largest at 10.7 pounds. He is a sweet fellow and likes attention. He can hold his own with his siblings. When put on the ground with his older siblings and aunts he seemed right at home.

Pup 3 is now Hunter’s Dynamic Celina and is now 9.3 pounds. She is a real go getter. She fights with her bigger brothers and explores everything. She likes to cuddle but only for a few minutes and then she is off again.

Pup four is now 10.3 pounds. He has a very pretty face right now but it will change as he grows. He is inquisitive and uses his nose to check things out. He likes being held just don’t do it too long. .

Pup five is also 10.3 pounds. He has a very expressive face and demands to be held. When not being held he runs around with the best of them and holds his own in fights. This morning he cried to be taken out to potty.

Celeste loves exploring the puppy pen. She raced around checking everything out. The dog house is raised off the ground to allow circulation and she didn’t hesitate trying to climb up the floor.

Pup seven is is still the heaviest at 11.3 pounds. He is a happy fellow and quick to start a wrestling match. Because he is the biggest the others tend to gang up on him. That doesn’t deter him and he is right back in the fray.

Pup 8 is now Hunter’s Sunny Cheyenne and weighs 9.0 pounds. She eagerly ran around exploring the puppy pen and found this twig growing out of a root. She was determined to chew it down. She likes attention but is always ready to go.

Clara is now 7.7 pounds and still the smallest. She started out a lady but has become a very feisty little girl. She holds her own in wrestling matches and take pleasure in getting her brothers down. She was determined to get the sock hanging from their rest box.