The pups are two weeks old.

Their eyes are opening and they have begun taking their first wobbly steps.  When mom enters the puppy box they scurry around trying to find her and crying for food.  They have begun their socialization and are less frantic when being held. 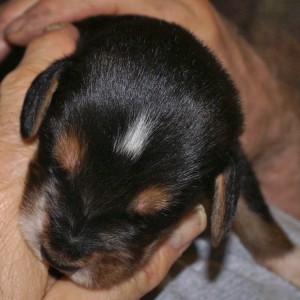 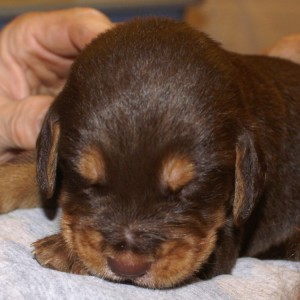 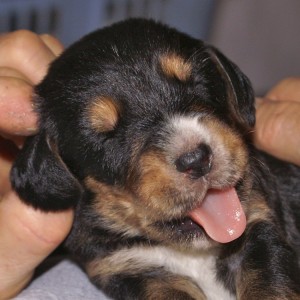 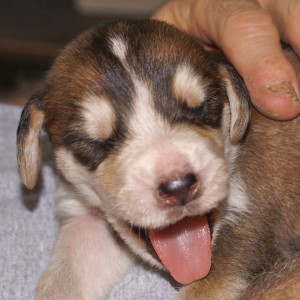 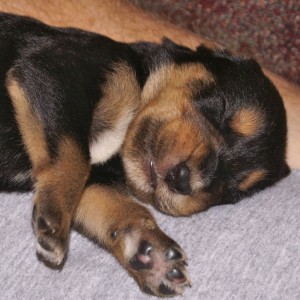 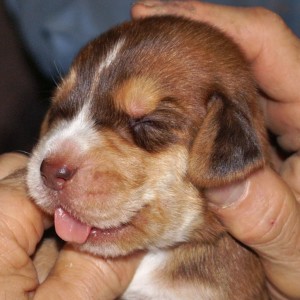 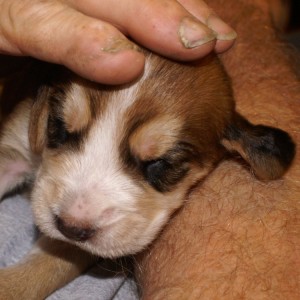 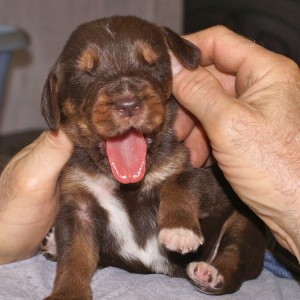 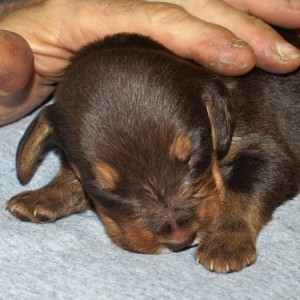 Puppy one is the smallest male even though he was first born. He spends a lot of time nursing like he is trying to catch up. He is very lively and didn’t want to hold still for his picture. He now weighs 1.6 pounds.

Puppy two is one of the largest males. He tends to get the choice spot for nursing. He enjoyed sleeping on Allen’s chest but can be very energetic especially when looking for mom. He now weighs 2.1 pounds.

Puppy three is working hard at walking even though she falls a lot she still keeps going. She was obviously enjoying having her little ear scratched. She now weighs 1.9 pounds.

Puppy four is the first brown male. He likes sleeping in odd positions such as wrapped around mom’s back. He wobbles around and over his siblings. He now weighs 1.9 pounds.

Puppy five is the second black male. He likes his food and bulls his way in when its time to nurse. He wobbles around with the others but really seems to enjoy sleeping with Allen. He now weighs 2.0 pounds.

Puppy six is the brown and tan female. She is getting on her feet and using her siblings to steady her. She seems to really enjoy having her chin scratched. She now weighs 1.9 pounds.

Puppy seven is the second brown male. He has a white blaze on his face that distinguishes him from his brother. He is one of the biggest pups. He now weighs 2.1 pounds.

Puppy eight is the first liver female. She likes nursing and will force her way in. She seems to like having her ear scratched but it didn’t keep her awake. She is now 2.1 pounds.

Puppy nine is doing great after her rough start. While she is still the smallest female she worms her way in and often nurses upside down. She does a lot of wobbling around. She is now up to 1.6 pounds.