On June 19 the Hunter Otterhound Litter F celebrated 8 weeks old. They also went in for their second round of shots. They were checked for parasites and everything was negative. They also were implanted with microchips. 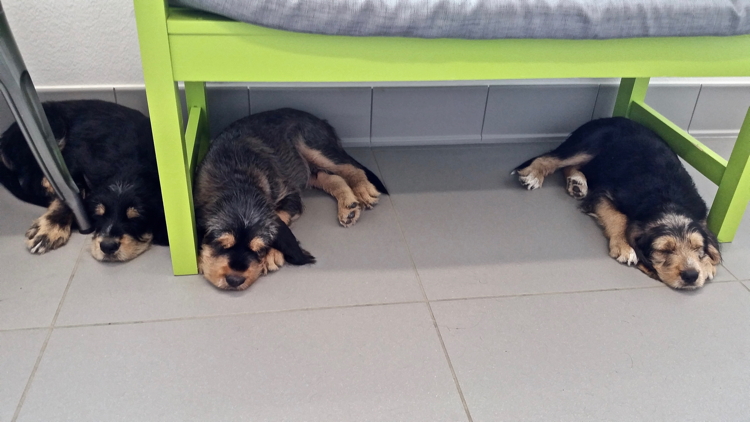 The pups have reached a point where they seldom mess in their whelping box and let us know when they need out. Most of the time the Hunter Otterhound Litter F make it through the night without getting up but occasionally they need to go out in the middle of the night. Usually, they go right back to sleep after a few minutes of play.

Since it has turned hot they play in the mornings and again just before and after their 11:00 feeding. From about noon until around four they nap in the cool around the roots of the tree. They get an early supper around 4:30 and play for a while then go back to napping. Around 8 o’clock comes the highlight of their day. They are turned loose in the main yard with most of the adults.

They have a great time playing with our Boxer mix Daisy and she enjoys playing with them. She even tries to share her bula with them. They really like their grand dam Cheyenne and she likes them better than her own pups. Typical grandma. They even shared a drink with her. For about 45 minutes they run and explore the main yard non-stop. Then just before dark they get their last meal of the day back in their pen and play until dark when they are brought in to bed. Sometimes they are tired enough to go right to sleep others they wrestle for a while before settling down for the night. 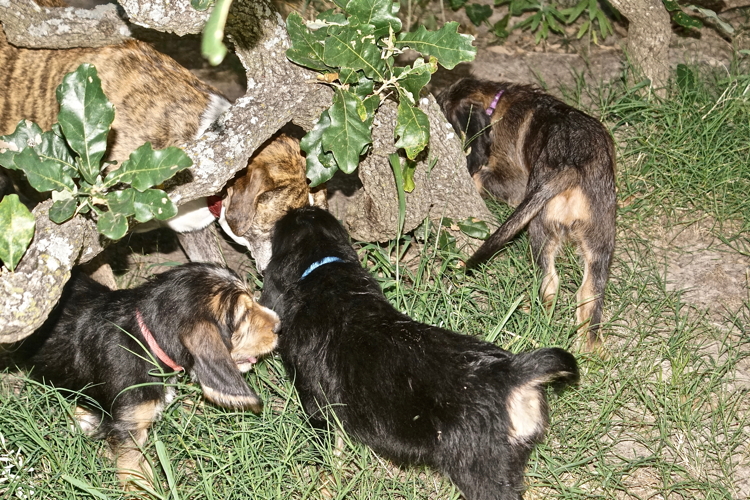 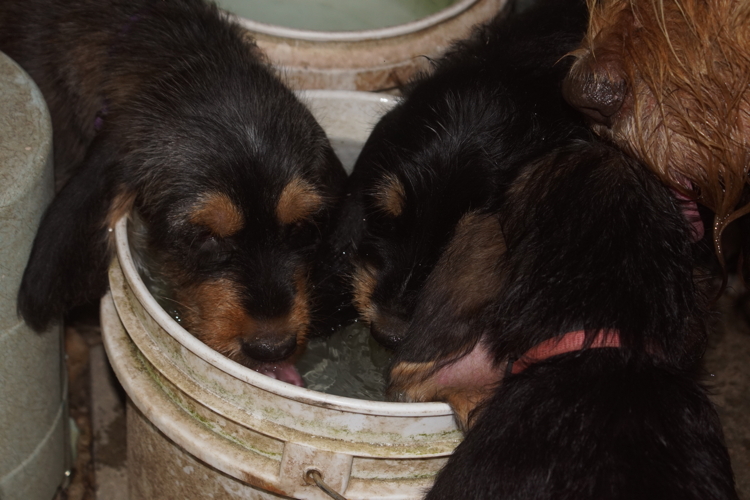 Hunter’s Frisco Traveler was 22 pounds on June 19. Frisco loves getting out in the main yard and likes to interact with his grandam and play with Daisy. He can be so sweet at times and at others he wants to do his own thing and will let you know he doesn’t want attention. 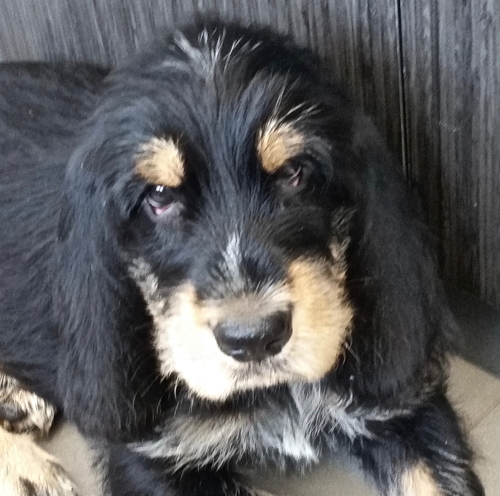 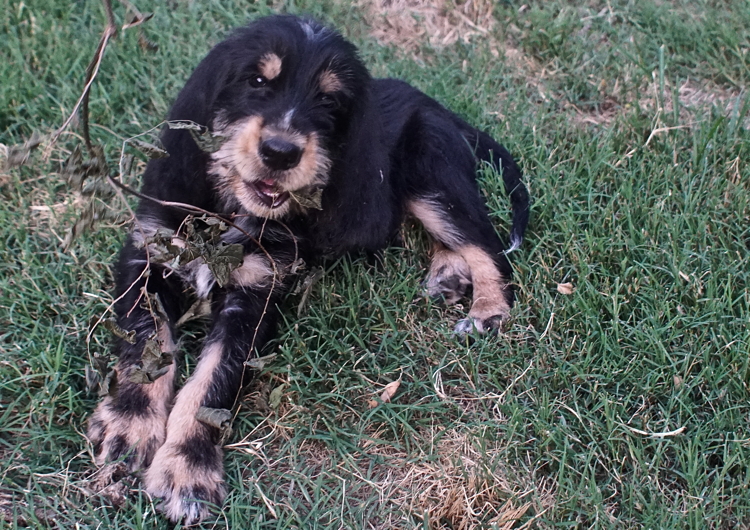 Hunter’s Forest Wanderer was 23.4 pounds on June 19. Forest discovered Daisy’s bula and tried to play with it with her but she just let him have it. He carried it around and wrestled with Fate over it. He doesn’t have a problem wandering off on his own but enjoys interacting with the adults. 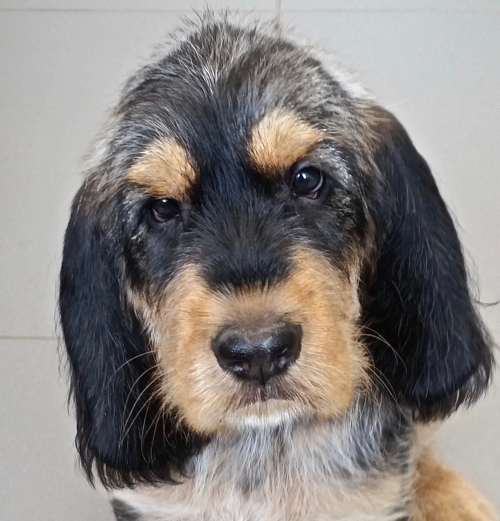 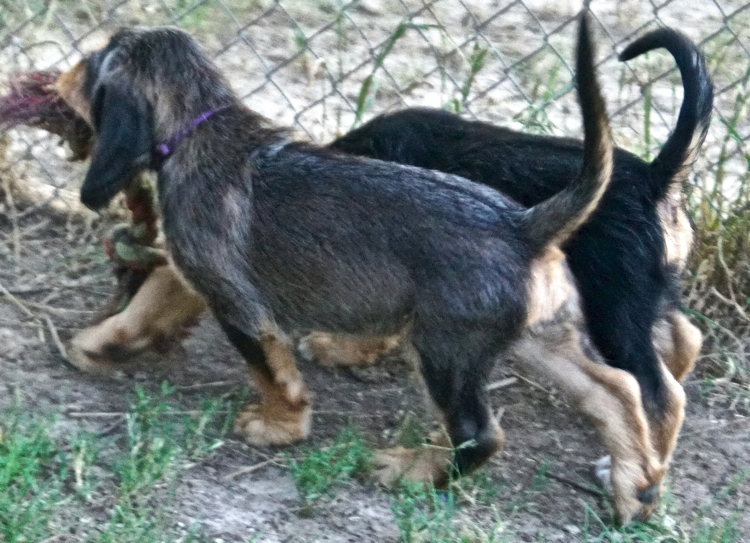 Hunter’s Fate of Magicwood was 17.4 pounds on June 19. Fate is still the escape artist. When you put her in the whelping box you have to add what we call Clara’s board. This adds about ten inches to the whelping box. Even then Fate does her best to get out when she wants out. 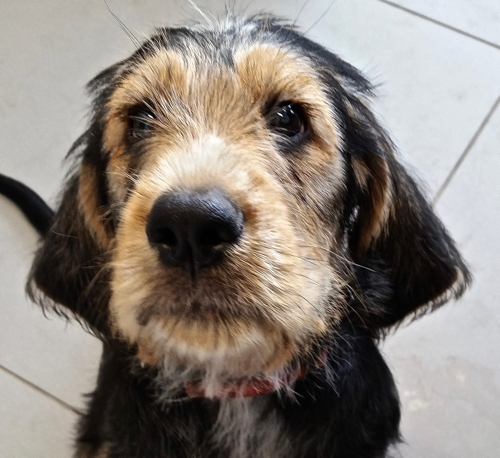 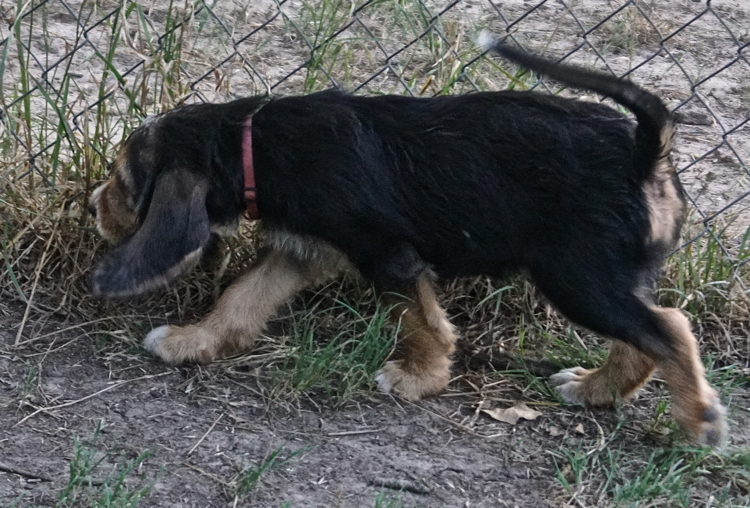