On November 9 the Hunter H Otterhound Litter were six weeks old. The weather has turned nice again so they have been spending most of their days outside. They stay in an 8 foot by 8 foot pen that is moved around the front yard.

They have a large cardboard box that they chew on more than sleep in. Once or twice a day we let them run loose in the front yard. They love hiding in the plants and under the bushes. The Otterhound Litter put up a fuss when put back in their pen but are usually to tired for it to last long.

They are eating four meals a day plus occasional dry kibble. Diana seldom nurses them during the day but does go in with them at night when they get restless. She soon will completely wean them. Their baby fuzz has now been replaced with their first puppy coat and some of the white markings have reappeared.

They are developing more distinct personalities. While the Otterhound Litter all like to cuddle at times at others they can be quite a handful. On November 9 they went in for their first shots and microchips. Everyone was given a clean bill of health. 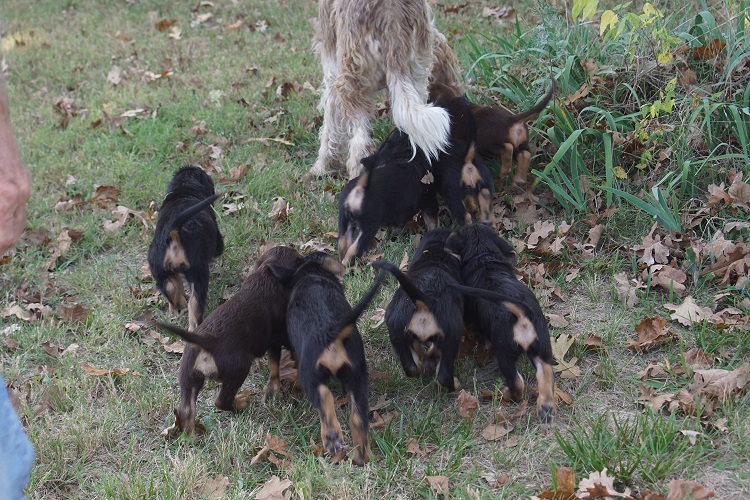 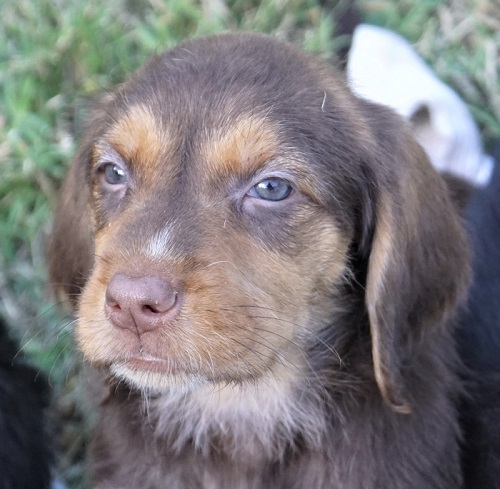 Puppy one Helena is still using her voice. The vet said she cried more than all the others put together. She is energetic and runs around a lot but doesn’t get far from the others. Her baby fuzz has been replaced by a sleek puppy coat. She weighed 8.4 pounds on November 9. 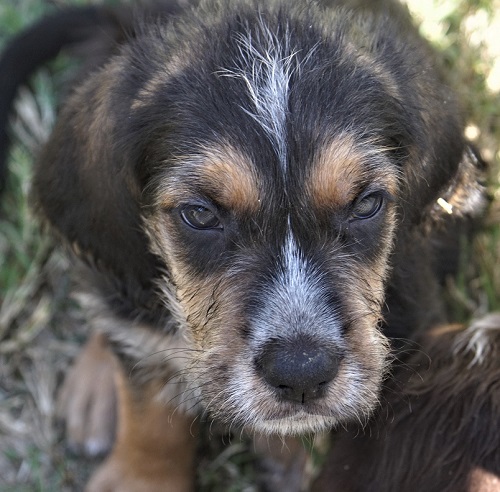 Puppy two Hiram is still the quietest but he loves running around the yard. Hiram always looks like he is thinking very hard about what is going on. The white on his face and mouth is still very distinct. His baby fuzz has been replaced with a longer puppy coat. On November 9 he weighed 9.4 pounds. 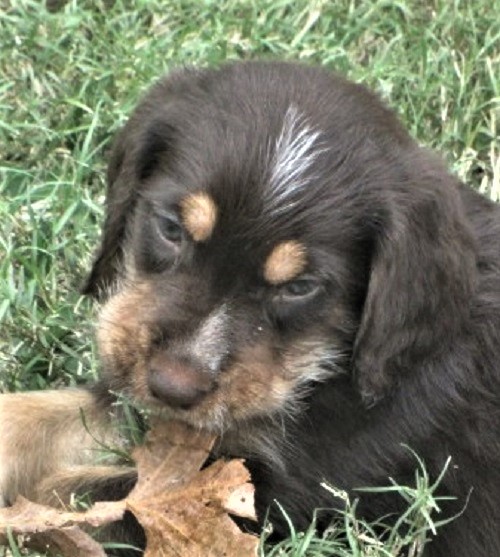 Puppy three Happy while still the smallest is not short on personality. He loves running around and getting into things. He is generally very easy going. His baby fuzz has given way to a smooth short puppy coat but he still has his white markings. On November 9 Happy weighed 7.4 pounds. 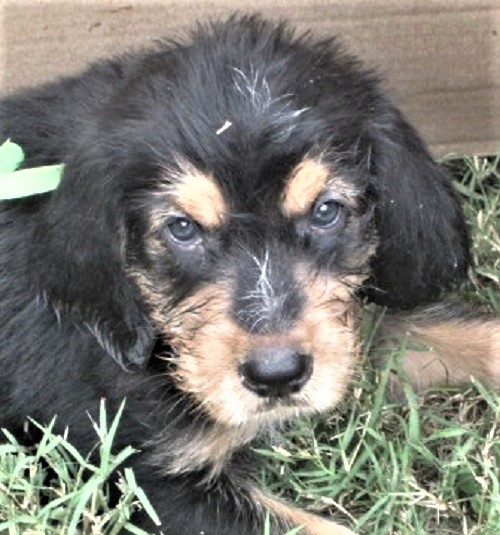 Puppy four Hondo is still the largest and most independent. He loves pulling on the sock tied to the side of the whelping box and pen. His baby fuzz has been replaced with a longer rather fly a way puppy coat. His white facial markings are now just a few hairs. Hondo weighed 10.0 pounds on November 9th. 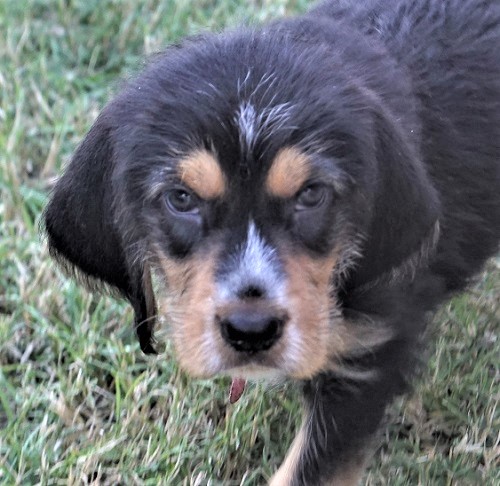 Puppy five Henrietta is usually the first to get into things. She doesn’t hesitate going off on her own exploring. She discovered she could hide under the amaryllis and snuck off. She rapidly switches from serious to pleading. Henrietta’s baby fuzz has given way to a thick straight puppy coat and her white markings are back. On November 9 she weighed 9.1 pounds. 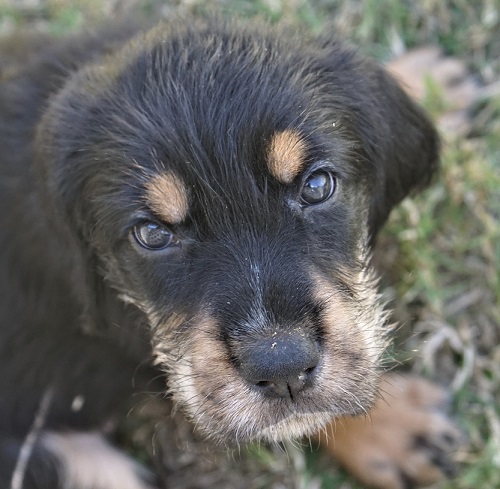 Puppy six Harriett always seems to have a pleading look. She has a very sweet face with just a trace of white. She some times likes being held while at others Harriet fights to get down. Her baby fuzz is now a nice smooth puppy coat. While she plays with the others she is still the least outgoing of the females. On November 9 she weighed 10.2 pounds. 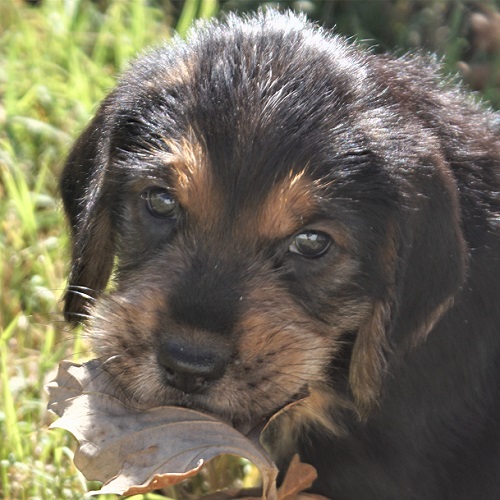 Puppy seven Harmony is very outgoing. She is into everything. She decided to go exploring when we let them out and we kept having to bring her back. She was with Henrietta when she was hiding under the amaryllis. Her baby fuzz has given way to a nice puppy coat and her tan eye spots have gotten larger. Harmony weighed 8.0 pounds. 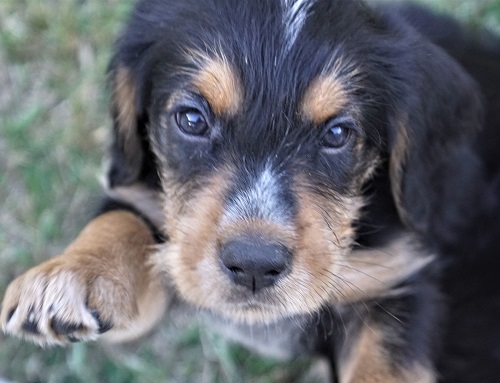 Puppy eight Holly tends to stick with the other pups. She has a sweet face and knows how to use it to get attention. While she sometimes wants attention there are others where she fights and growls if  Holly doesn’t want to be held. Now that she has lost her baby fuzz she has a nice puppy coat. She weighed 9.8 pounds on November 9. 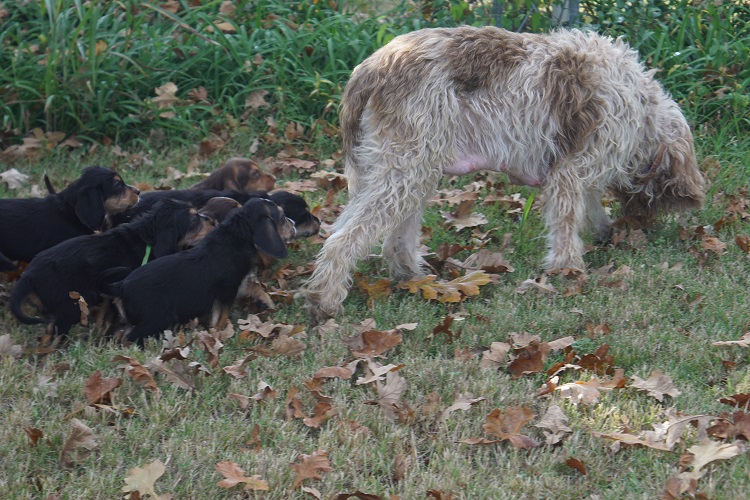