Things have been up and down in Otterhound Dog News since my last post.

We missed most of the shows this past year due to work. Then we missed the December show due to ice. So Cheyenne and Clara are still trying to get their championships.

We lost our 12 year old German Shorthair pointer Happy in September and our 13 year old lab/terrier mix Elee in October..

Five of the girls came in heat in December so we ended 2013 in a confusion of shuffling dogs – girls in Barclay out or Barclay in and girls out.

Just as things were settling down we learned that Riverrun Meant To Be (Viola) was in heat. We rushed around to get things lined up for Barclay to be used as stud. After several hectic days everything was done and Viola was bred on January 25. We learned mid February that Barclay and Viola are to be parents to seven or eight.

Two weeks ago Pris suddenly started limping. We discovered a couple of lumps that turned out to be cancer. However of more concern was the fact that she was limping on first her front left then her right rear. In a couple of days she could no longer stand. With medication she got to where she could move around but that lasted only a few days and she was again no longer able to get up. The vet ran all kinds of tests but she stopped eating and was not getting better. We had to make the hard decision to let her go. March 8, 2014 Aberdeen’s Perfectly Normal quietly went to sleep. She will be sorely missed.

Things must go on and we have puppies to look forward to. Viola is due to whelp around the last of March. Anyone interested check out http://riverrunotterhounds.com. 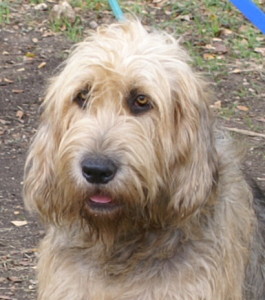