The pups repeat this again at four o’clock and at seven. Around nine thirty we pick up all the toys and encourage the pups to potty. Once everything is cleaned up we bring the pups into bed.

The pups enjoy playing with their cottage cheese cups and lids which they quickly chew up so they have to be replaced. They also enjoy milk jugs and empty cardboard boxes. They have a four by five foot piece of cardboard to sleep on, chew on or use as a slide.

There is also a four by five foot dog house that they can sleep or play in. They like to sleep between the roots of the tree in the pen as well. On Saturday we locked the big dogs in the pond area and let the pups run in the main yard. They liked all the room to run the only problem was the dog flaps on the porch. Until the pups were shown they could push through the flaps they would stand inside and holler to get out 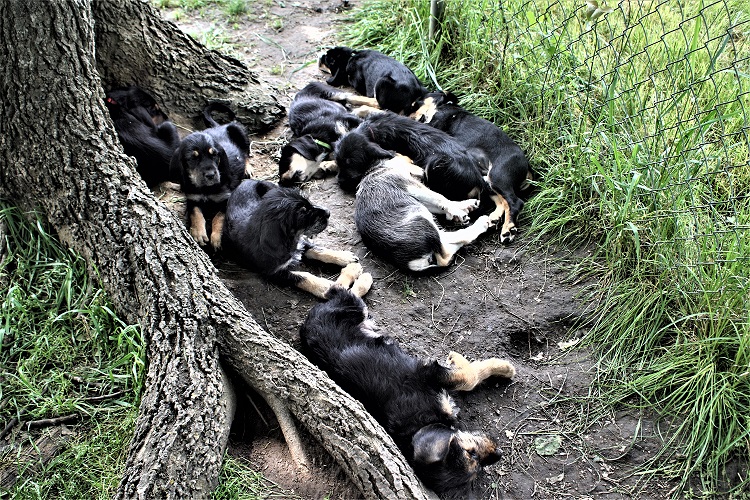 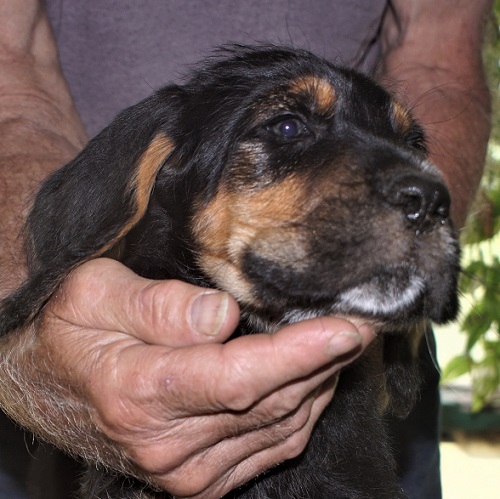 Pup one Graham still has the sleek coat and long ears that make him look like a hound dog. He is generally outgoing and into everything. He tried to turn on the hose by chewing on the faucet. He can rough house with the best of them but enjoys being held and giving kisses. On April 27 Graham weighed 12 pounds. 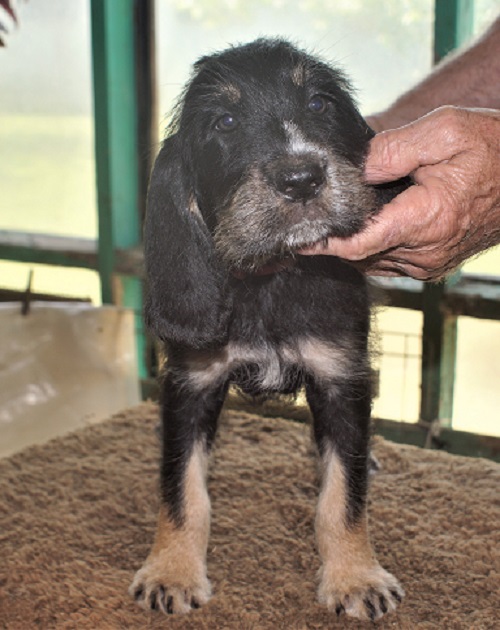 Pup two Glory has a beautiful set of ears and a nice stance. She liked talking to her grandam Cheyenne even though she fell over backwards. She decided to help brother Gerald pull a rug out of one of the kennels on the back porch. On April 27 Glory weighed 11.8. 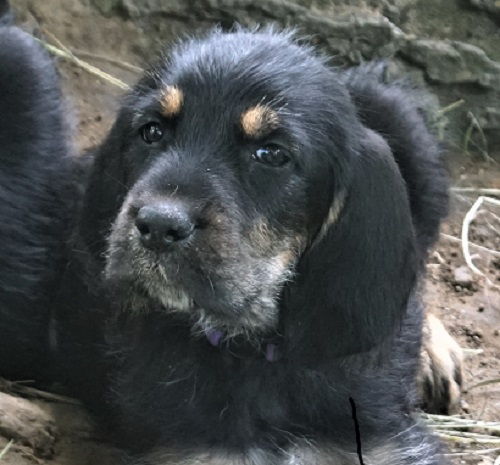 Pup three Gem caught me sneaking up on the litter sleeping in the tree roots almost like she was keeping watch over the others sleeping. Once in the main yard she checked everything out and tried her paw at digging up a couple of concrete blocks. She is no longer the smallest. On April 27 Gem weighed 12.4. 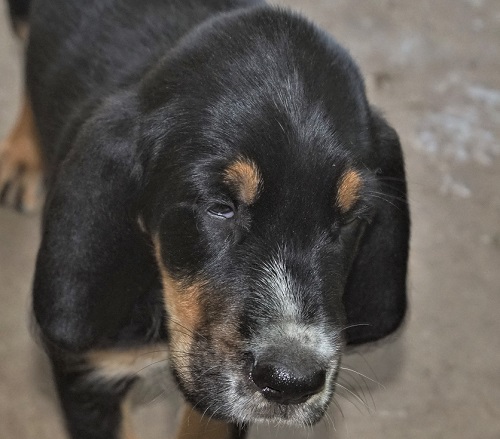 Pup four Glen has a nice set of ears and a good stance when you can get him to stand still. He is almost always going. He likes attention but only wants to be held for a minute then he is squirming to get down. He is ready to take on anything. He is still the largest. On April 27 Glen weighed 14.4. 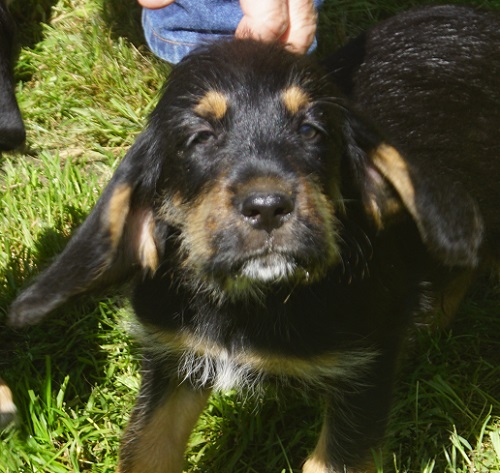 Pup five Grady has developed well. His mid length coat has started to grizzle along the back and his ears are nice and long. He really didn’t care for standing for pictures. He preferred to check things out. He does well with the other pups but is perfectly happy being held. On April 27 Grady weighed 13.4. 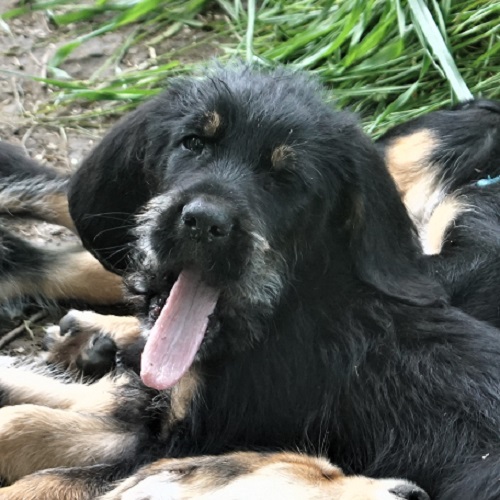 Pup six Gerald is still the darkest of the males. His face is looking more mature as he fills out and his ears are developing well. Gerald didn’t like to be stacked but has a very good natural stance. He discovered a rug half out of a kennel and decided to chew on it. On April 27 Gerald weighed 14.3. 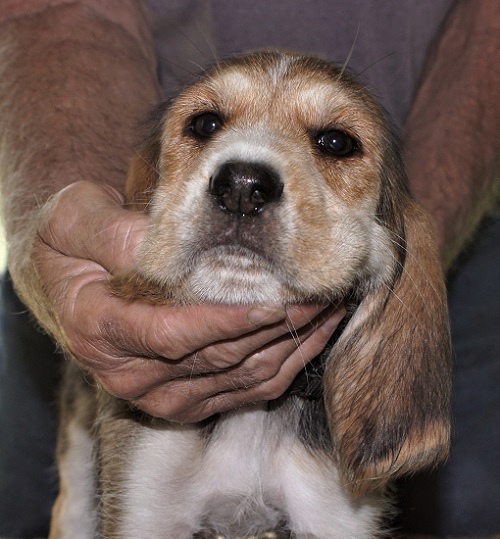 Pup seven Georgia still looks like a beagle especially as her ears are nice and long. She is ready for anything and can hold her own with her siblings. She likes to play and run around. She isn’t shy about letting you know when she wants attention. On April 27 Georgia weighed 12.5. 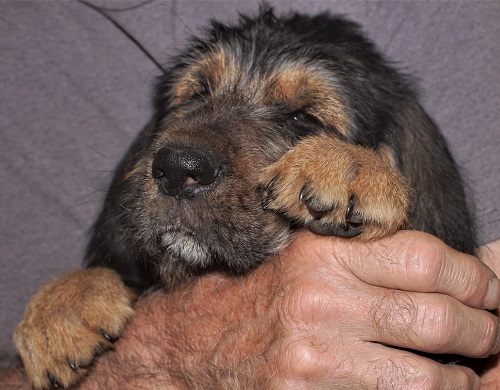 Pup eight Gary is so distinctive with his tan, black and white fuzzy face. He can be right in the middle of things one minute and off on his own the next. While he grumps when first picked up as soon as he knows it is a person and not a sibling he turns on the charm. On April 27 Gary weighed 13.6. 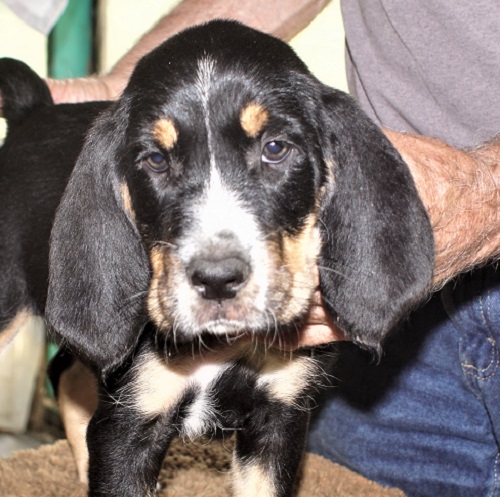 Pup nine Gordon was the most cooperative when stacking. He has a nice natural stance. He is into everything and lets you know when he wants attention. He has put on a growth spurt. He still looks thin and sleek but his legs are getting longer and he has caught up or passed his brothers in weight. On April 27 Gordon weighed 13.6.