On April 6, the Hunter G litter became 5 Week Otterhound Pups. They have made great strides in the past week. They went from three solid meals a day to four. They are gaining weight rapidly.

As 5 Week Otterhound Pups they love going outside and like little kids don’t want to come in even if they are cold. They have an eight foot by eight foot pen we put them in but they prefer to run around in the yard. The Otterhound pups don’t think the pen is big enough. All of the pups are very affectionate. They all like to cuddle and give kisses but not for long. They want to run.

Some time early April 3 (around 1:00 AM) Allen found Dawn on the dog beds next to the couch with a puppy happily nursing. Needless to say he promptly added another board to the whelping box after returning the puppy. All of the puppies are shedding their baby coats and getting their puppy coats. 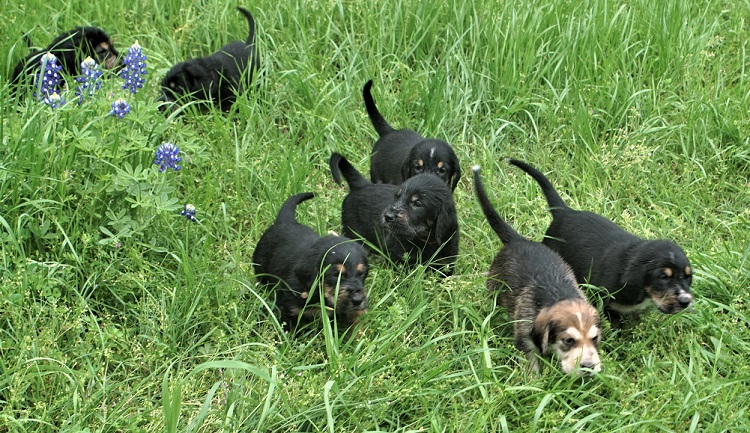 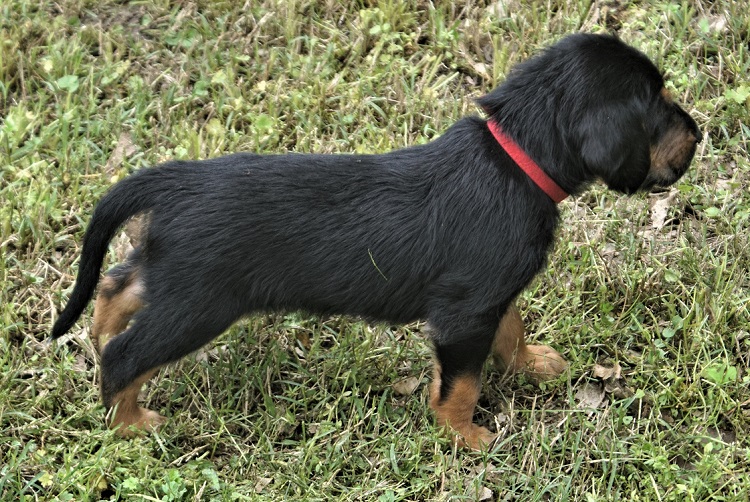 Pup one Graham likes to go off on his own. He can be pretty feisty when the others bother him and he doesn’t want to play. His first puppy coat is medium in length and he is developing a broad head typical of an Otterhound. On April 6 Graham weighed 6.3 pounds. 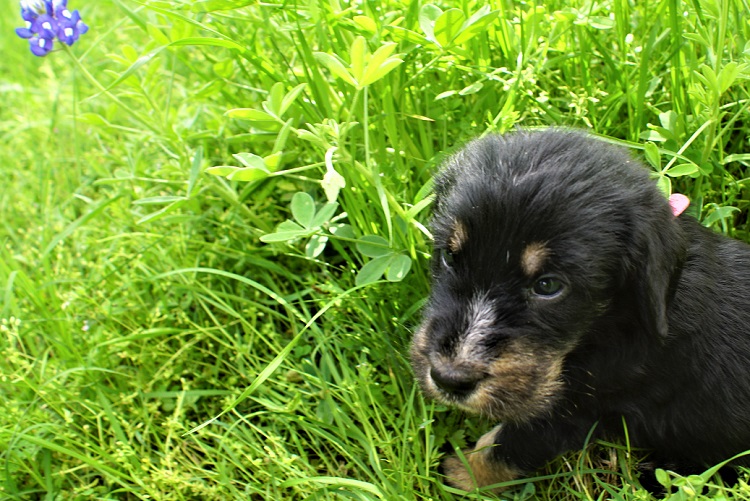 Pup two Glory likes to play or fight depending on who’s view point you take. Generally she is playing but the pup on the receiving end is not happy. Her first puppy coat is longer and currently a bit fuzzy. She is also developing the broad Otterhound face. On April 6 Glory weighed 6.4 pounds. 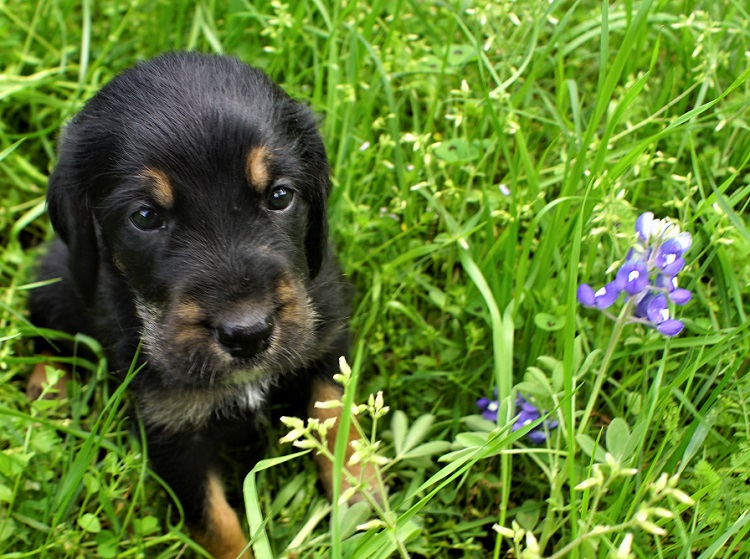 Pup three Gem has a sweet disposition and likes to look you in the eyes. She prefers to disappear in the tall grass when she potties. She still has the features of a younger pup and her coat is only slightly longer than her baby coat. She is the smallest of the pups and on April 6 Gem weighed 5.7 pounds. 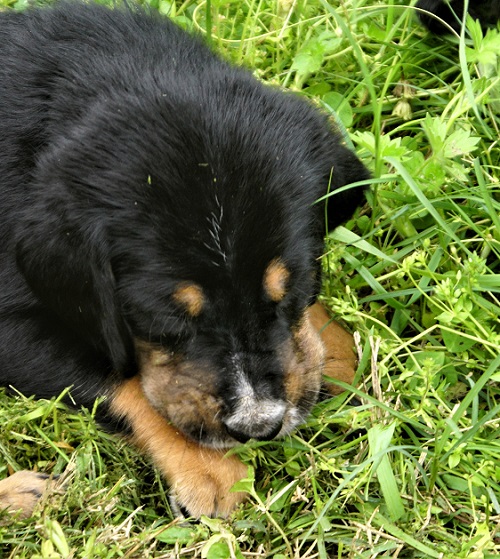 Pup four Glen is possibly the midnight escapee caught nursing as he gained a half pound over night. He can be very loving and still likes to wrap his paws around your wrist. His first puppy coat is slightly longer than his baby coat and he is starting to fill out. Some times his white spot is hardly visible. On April 6 Glen weighed 7.1 pounds. 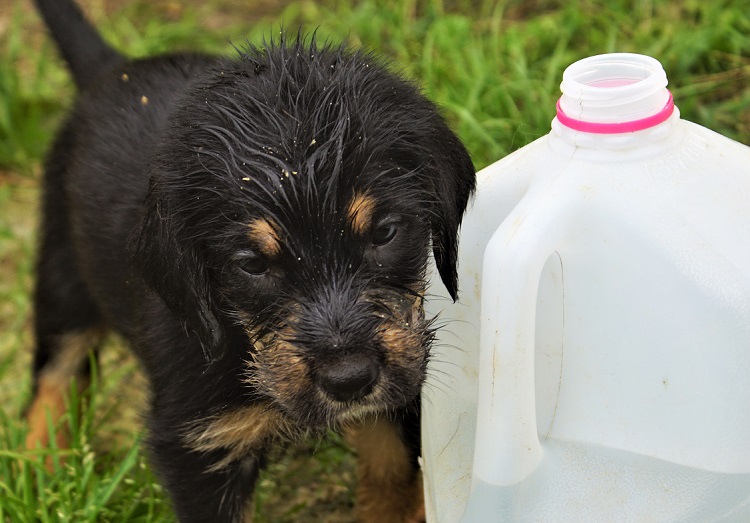 Pup five Grady has changed the most. He has started to fill out and his coat has gone from the smooth baby fur to a nice mid length. Though he is not that heavy he has a broad build. He discovered that milk jugs are interesting play things but not when full of water. On April 6 Grady weighed 6.4 pounds. 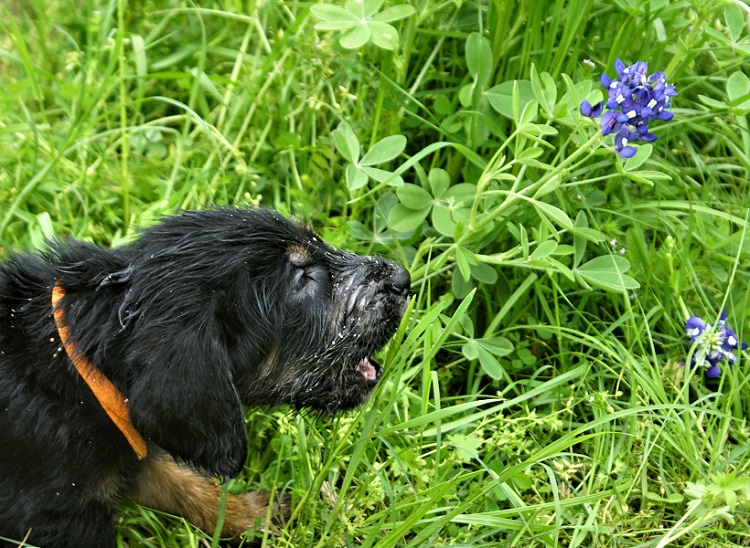 Pup six Gerald is still the darkest male. He has developed a mid length puppy coat that is a bit soft at present. His features are just starting to fill out. He really liked the Blue Bonnets. So much so he kept trying to eat them. Though smaller he doesn’t put up with anything from the others. On April 6 Gerald weighed 6.3 pounds. 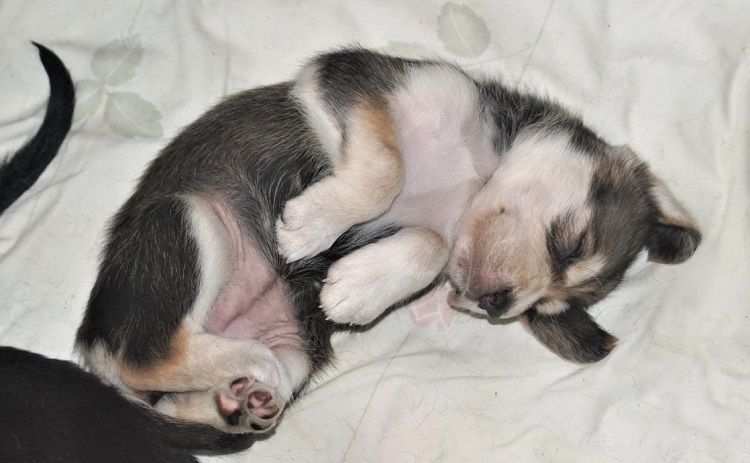 Pup seven Georgia is very outgoing. She happily runs off by herself when out in the yard. While she has lost her baby fur her new coat is pretty much the same color just slightly longer. She likes to be held but can only hold still for a little while. On April 6 Georgia weighed 6.4 pounds. 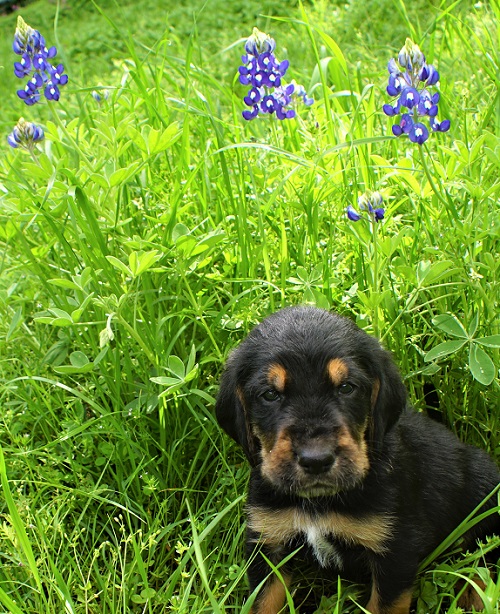 Pup eight Gary while not the heaviest is the largest of the pups. He is developing the broad head and nose of the Otterhound. His puppy coat is medium length and fairly coarse. He really likes his food and most of the time his head and face are soggy from shoving his way through the food dish. On April 6 Gary weighed 6.9 pounds. 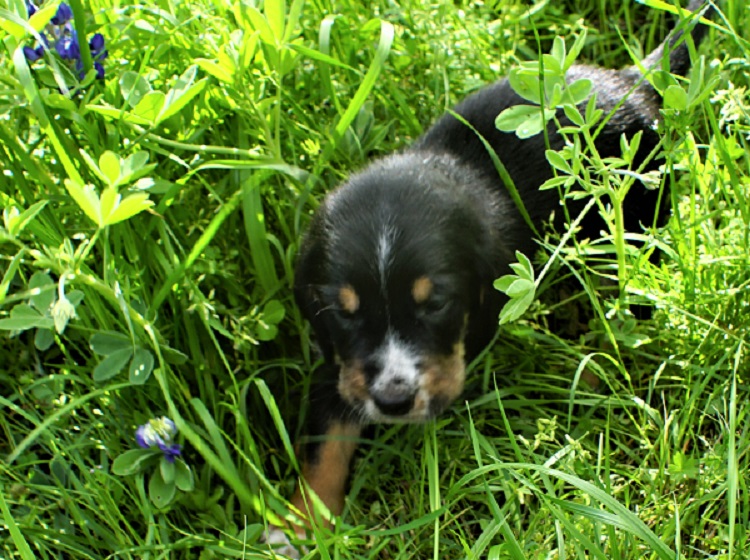 Pup nine Gordon still looks like a baby. His face is narrow and his coat is short and sleek. Some times his blaze is very plan to see while at others it is almost invisible. He has several times cried to be taken out to potty but is never ready to go back to bed. He really likes to play. On April 6 Gordon weighed 6.4 pounds.