On July 10 the Hunter F litter became 11 Week Otterhound Puppies. Over the past week the F litter has gone from chubby and short legged to skinny leggy pups. In the mornings they are released from their whelping box and allowed to run outside with the big dogs.

They have freedom of the main yard until breakfast. Then they race to their pen for breakfast. They stay in their pen until around 10 A.M. when the big dogs get back from the pond and the pond gate is shut. They have lunch on the back porch and only go back to the puppy pen when it is time for supper.

The secondary gate to their puppy pen was removed this week so we no longer have to lift them in and out. The 11 Week Otterhound Puppies all stood on the short gate ready to go as soon as Allen removed it.

They went down to the pond for the first time this week. They had only gotten their feet wet until they mistakenly thought the smooth green water primrose was solid ground. The 11 Week Otterhound Puppies.took the soaking like Otterhounds and thrashed their way out of the pond. That didn’t deter them from wanting to go back to the pond but next time they knew better than trying to walk on the primrose.

On the 10th they went in for their third round of shots. They had a blood draw for the health study and CHIC DNA registry. They received their second dose of heartworm medication and a clean bill of health. 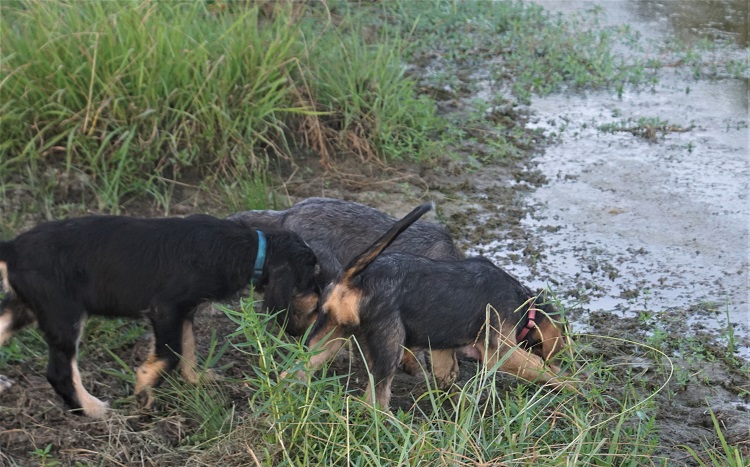 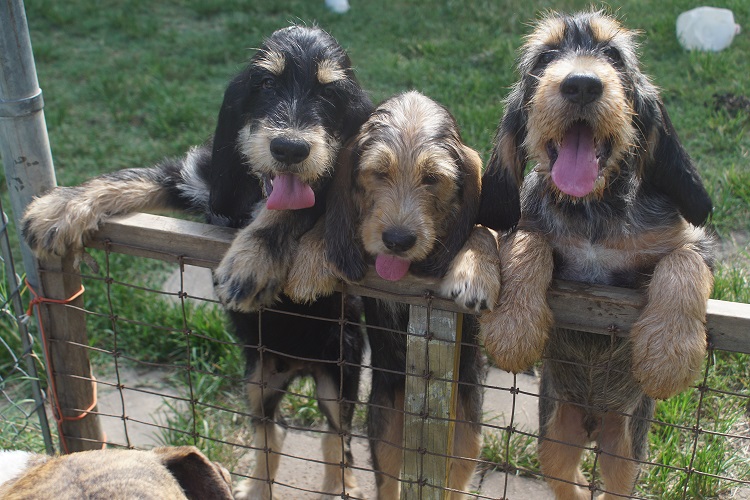 Hunter’s Frisco Traveler was 32.7 pounds. Frisco was the first to discover that water primrose is not something you can walk on. He quickly got his feet down and fought his way free. It didn’t slow him from going back in the pond the next day. On Friday July 12 Frisco went to his new home. We miss him. 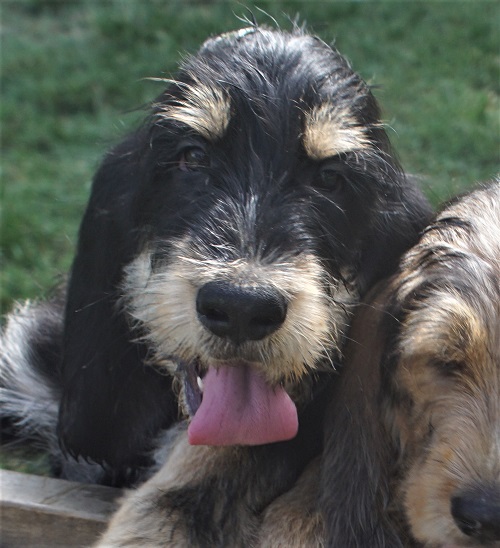 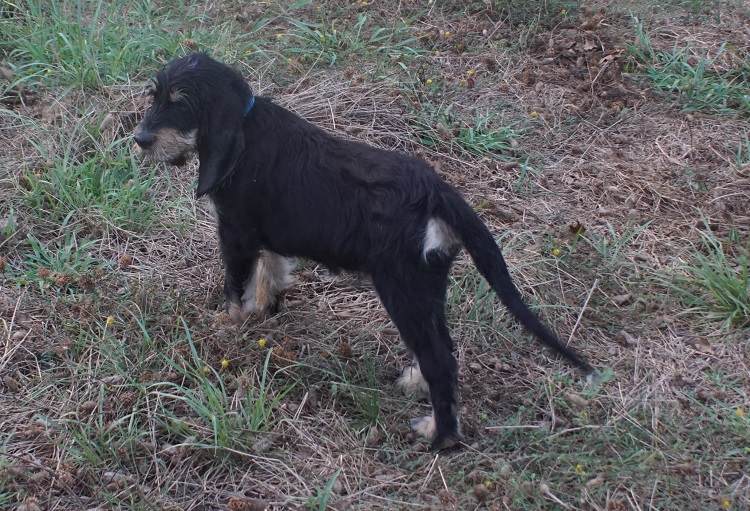 Hunter’s Forest Wanderer was 31.7 pounds. Forest likes coming in the house and sleeping with the big dogs during the heat of the day. He is not averse to a good snooze on the rugs on the back porch either. He enjoys going down to the pond and readily explores the edge in spite of the mud and an occasion dunking. Forest will be staying with our family. 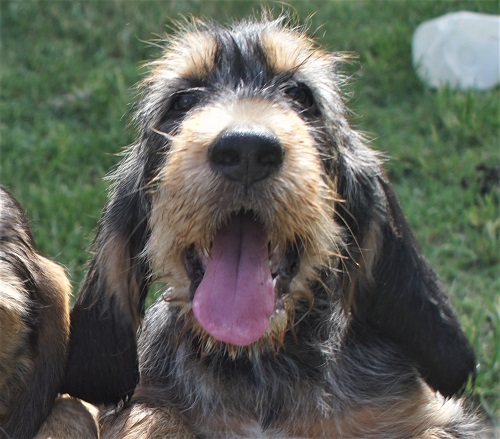 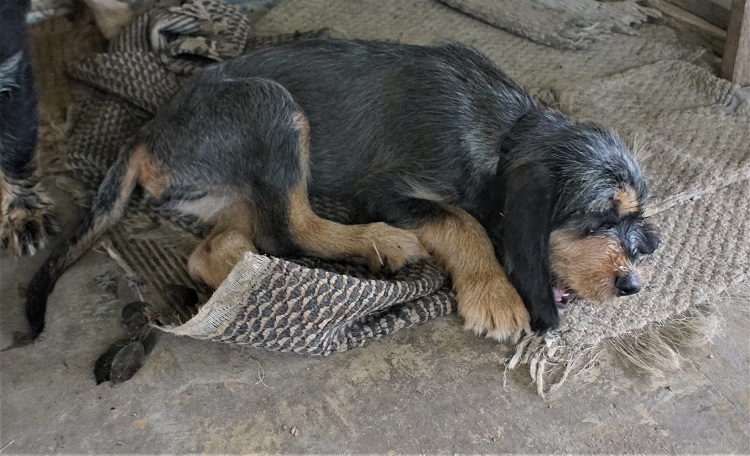 Hunter’s Fate of Magicwood was 27.0 pounds. Fate has finally gotten heavy enough it is hard for her to climb out. Hard not impossible. She loves going anywhere if it means she can run. She was racing to catch Frisco when she discovered you can’t walk on water primrose. She can be calm for several minutes before exploding in action again. Fate went to her new home on Saturday. 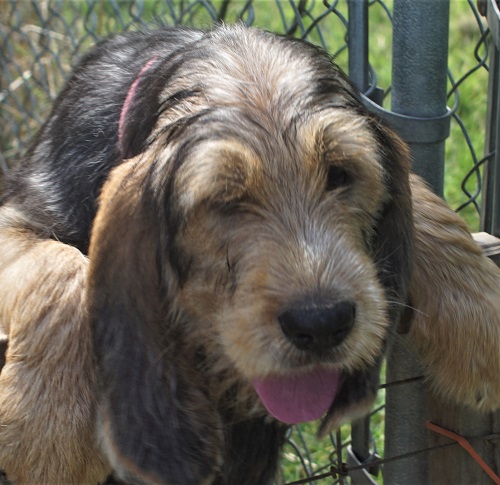 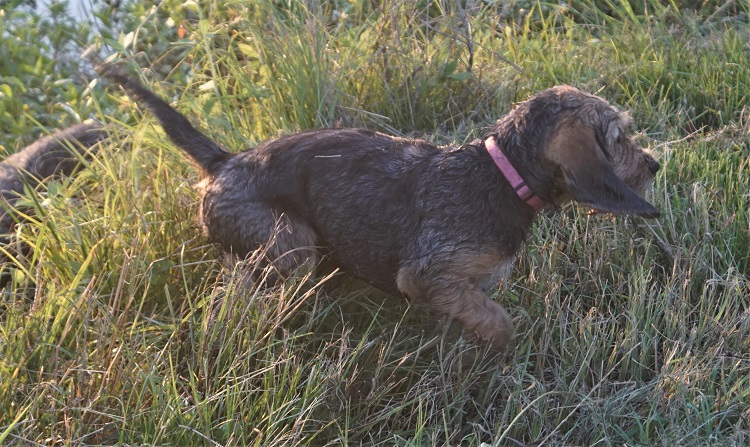 See more of the F Litter before they became Otterhound 11 weeks.