On July 3 the Hunter F litter are 10 week old Otterhounds.The F litter continues to develop from tiny pups to outgoing individuals. They haven’t wet their whelping box in two weeks now but they do still shred the papers.

They are put to bed around 9:45 PM and have to go out to potty and get a drink of water about ten minutes later. Once back in the whelping box they settle down and sleep or play quietly until around 6:30 in the morning even when we have to be up early.

The 10 week old Otterhounds outgrew their baby collars and started wearing regular collars. Frisco is still wearing blue while Forest now has a black collar. Fate’s collar is now back to pink like the ribbon she had to begin with.

They spend most of the heat of the day napping like everyone else but while it is cool in the mornings and evenings they love to play. Anything makes a good toy. Empty milk jugs are great. The 10 week old Otterhounds can sink their sharp puppy teeth into the plastic and carry them around by the handle. They love playing with boxes as they are easy to chew. When a box is being pulled three ways it doesn’t last long.

They decided yard work was great fun and helped with trimming brush. The limbs of brush were just more toys to them and they quickly scattered the pile about the yard. 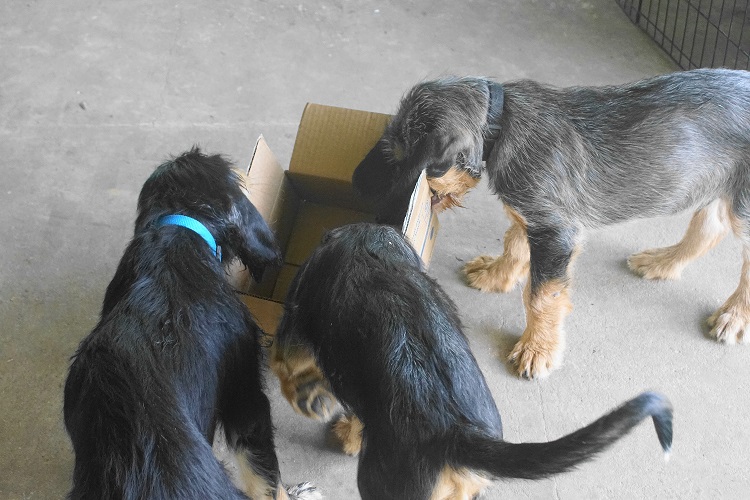 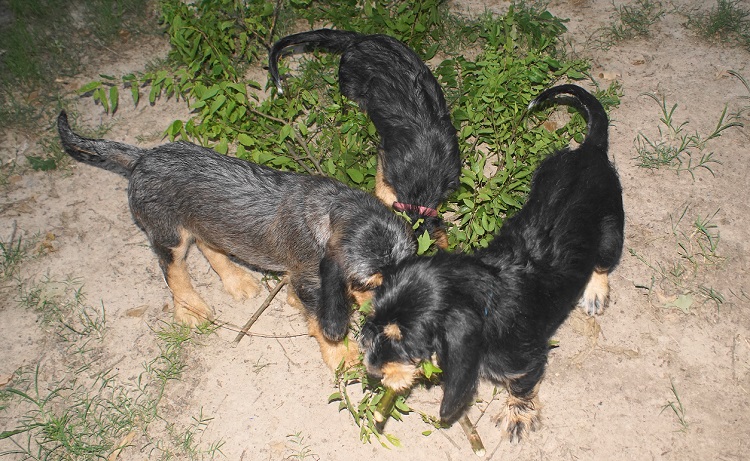 Hunter’s Frisco Traveler was 29.2 pounds on July 3. Frisco likes to get a long drink of water completely soaking his face and ears then runs over to give you wet kisses. He is the main one to get up just a few minutes after being put to bed. He insists that he needs to go out. Once out in the small pen he gets a drink and potties then he is ready for bed. 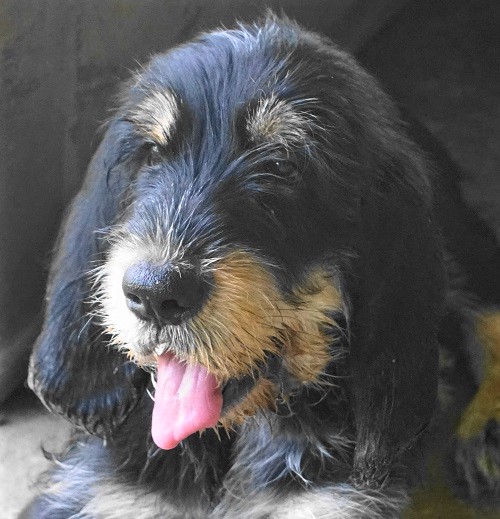 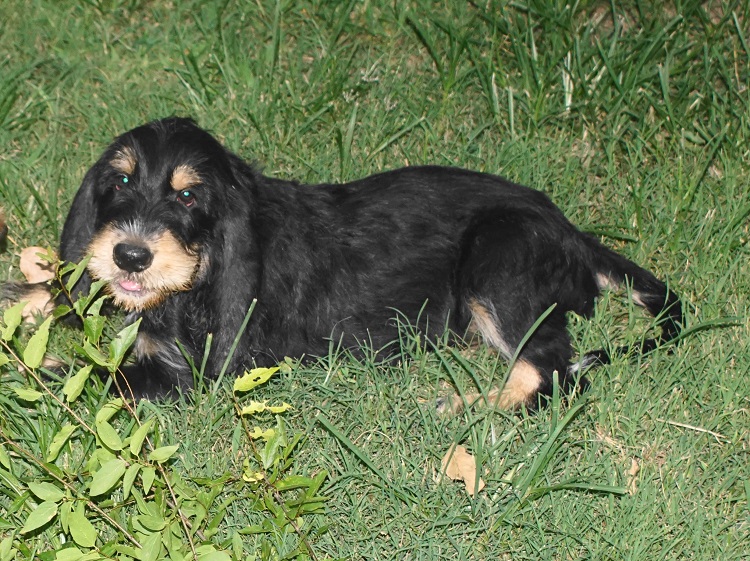 Hunter’s Forest Wanderer was 28.5 pounds on July 3. Forest has changed the most since birth. His brown coat first darkened then began to grizzle. He is still the most laid back of the three and struggles the least when we have to carry them. He promptly settles down when put to bed but if the others go out he will. 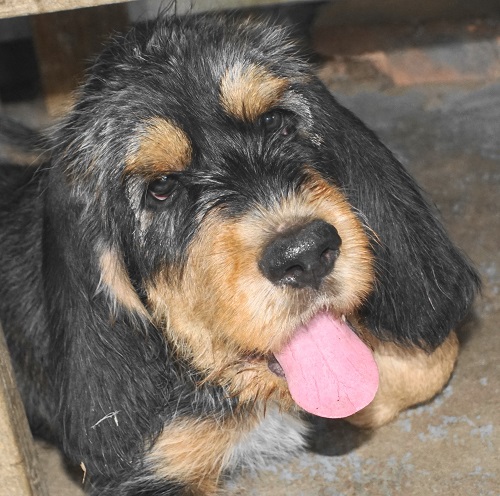 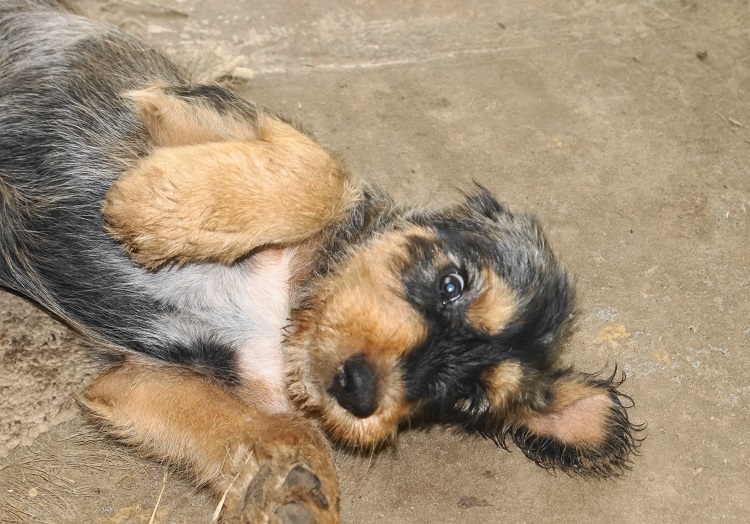 Hunter’s Fate of Magicwood was 22.8 pounds on July 3. Fate is still the escape artist. She doesn’t like to be confined. Except at night she only naps for brief periods and is always getting her brothers up from their naps. She loves attention but is easily distracted so tends to race from one thing to another. 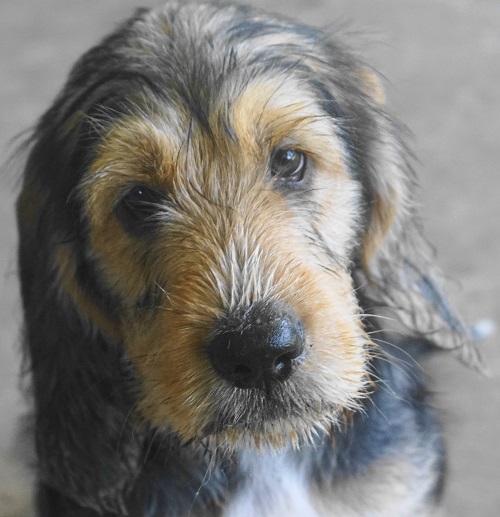 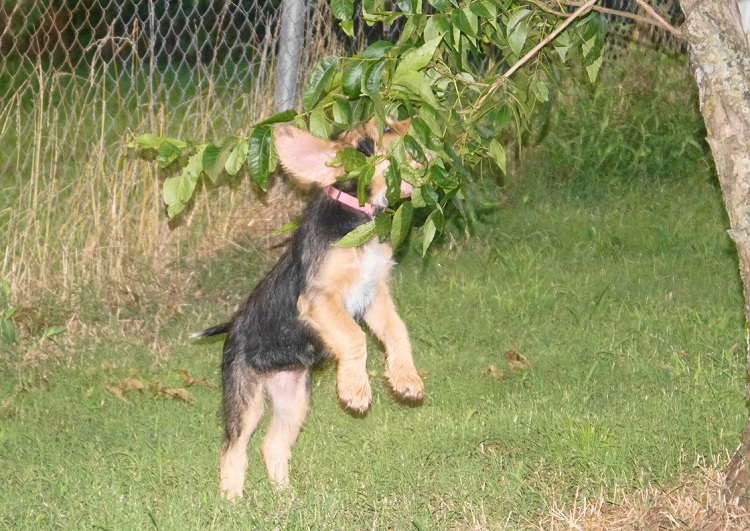 See more of the F Litter before they became 10 week old Otterhounds.