Everyone has been staying in the yard lately. Since the pecans have started to ripen the squirrels have been keeping everyone busy chasing them from tree to tree.

In the usual Otterhound devotion to hunting Bonney injured a toe and wore her pads raw. She had to sit out of the hunt for a couple of days and didn’t enjoy that a bit.

On October 15 we took the four pups to the Tyler Texas Kennel Club show. It was their first time to actually show.

After encountering a judge at the Dallas show that questioned the coloration of Dallas and Diana we were pleased that this judge had no problems with the girls coloration. It was especially nice since the incomplete tan on their legs makes it look like their legs are dirty. 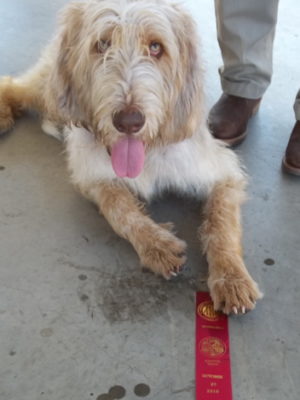 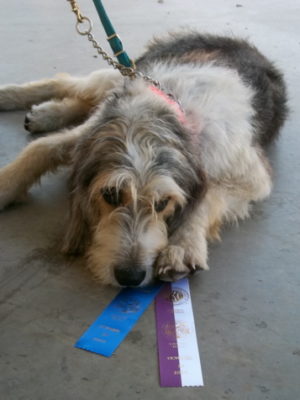 Dallas moved around nicely which she hadn’t been doing in our practice ring. She took first over Diana and also reserve winner. Later when we took pictures it was hard to tell if she was glad it was over or sad that it was.

Diana was eager to go around and was moving too fast. This caused her some problems with traction on the concrete floors which threw her off stride. She took second in the puppy class. In her pictures she seems like she would like to go again ribbon or no ribbon.

Dora went around with more energy than Dawn and won the American Bred class. Then she went up against Dallas for Winners Bitch and Best of Breed. It was a day of firsts for her – her first show, her first win, her first Best of Breed and her first major toward her championship. 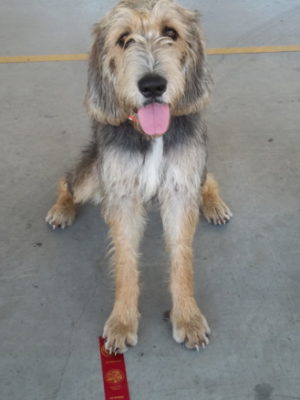 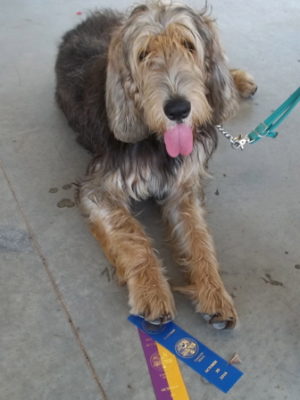 Dawn seemed to take the whole thing in stride. She seemed completely happy with her red ribbon. She got one and as far as she can tell it was the same as the others. In fact she seemed completely happy with everything. She was especially pleased when a couple interested in Otterhounds stopped to talk and Dawn went all out to make a good impression.

Except for the ride in the van they seemed to take the whole show in stride. They had their after show treat and lounged around until time to go. Then we had the “I don’t want to ride” discussion all over again. They would be perfectly happy to walk to the next show.

Since the show they have gone back to squirrel hunting, swimming and chasing each other around the pond.

The continued lack of rain has lowered the water in the pond until a ridge about fifteen feet out from the north bank is near the surface. In the past week they discovered that the water is only up to their shoulders on the ridge and they can run down it from the east side of the pond to the dam on the west side. Some times they seem to be trying to push each other off the ridge into the deeper water. 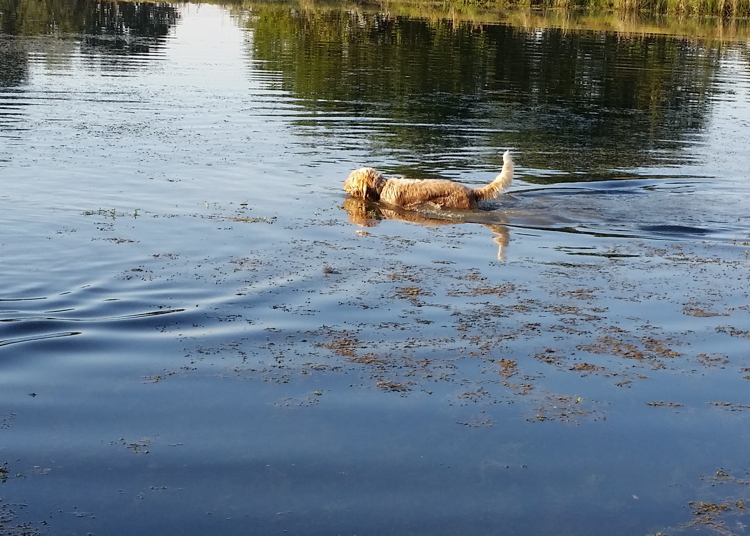