The D litter was six weeks old on January 25. The the week was filled with escapes The pups’ uncle Barclay staged a couple of escapes from the back porch. The first time I caught two of the three puppies involved following him off the porch and the second time two of the three were visiting aunt Bonney in one of the kennels.

The puppies got to play with a new toy: “Hide A Bee”. Playing and fighting over the bees and the hive they hide in was great fun. On the 25th the puppies got their first round of shots. 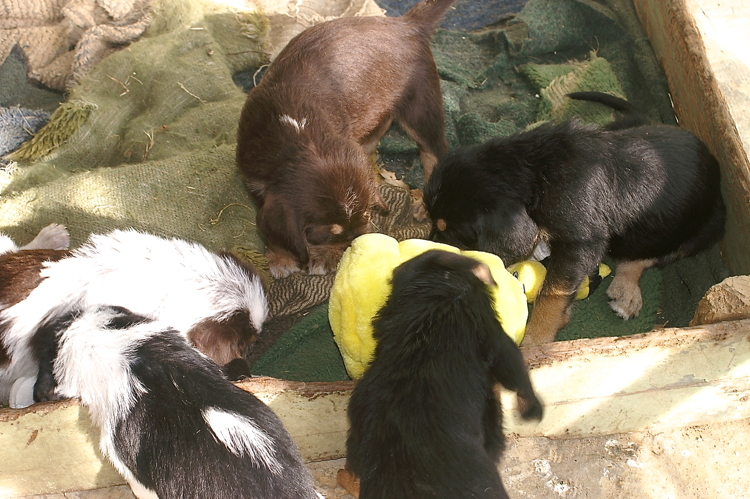 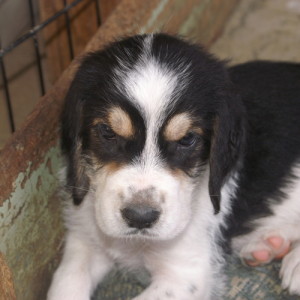 Dallas was involved in the first escape. She had snuck out the dog door and was wandering around outside. As I was putting the other two back she wandered in the dog door just like she had been doing it all her life. She likes attention but has no problem on her own. She was 8.2 pounds. 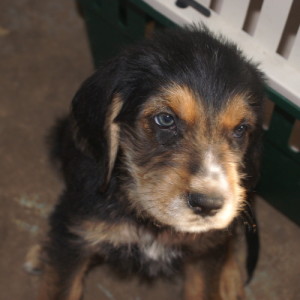 Darco doesn’t hesitate to get involved in anything that comes his way but but tends to let things pass him by. He is somewhat of a loner. He has a very colorful face and can look very sweet at times. He is not the heaviest but looks it as he has a very stocky build. He was 9.1 pounds. 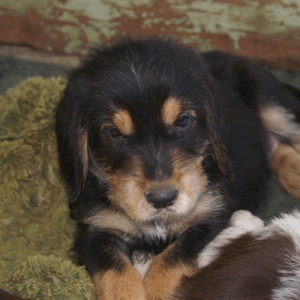 Dora is still a traveler and it is hard to get pictures of her unless she is laying down. She was one of the first bunch of escapees She loved playing with the “Hide A Bee” bees and wandered off with her head stuck in the hive. She can be very sweet one minute and a real terror the next. She was 8.8 pounds 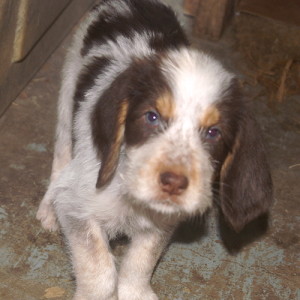 Diana loves attention but puts up a big show of resistance when you pick her up. She can be quite vocal when she wants something. She loves going outside and will sit and holler at the door wanting out. She has a very expressive face and the longest coat of all the pups. She was 7.9 pounds. 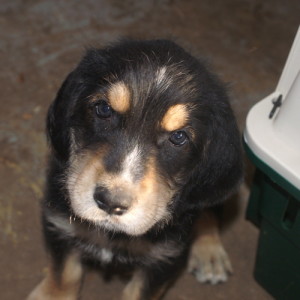 Douglas loves attention. He will sit at your feet and look up at you as if to say “pick me up”. While he likes being held he also likes running and playing. He discovered how to get past the gate into the house and was found wandering around the house several times. He doesn’t look it but is the biggest at 10.1 pounds. 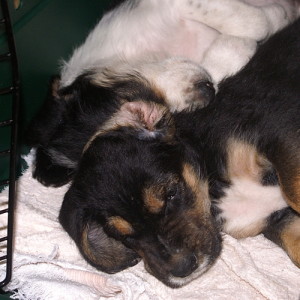 Doyle is a mix of contrasts. He can be very sweet and love being held and the next minute he is a fighter raring to go. In the first escape he was following Barclay off the porch and in the next he was climbing in the woodpile when he was caught. He is the same size as his aunt Clara at that age so should be a small male. He was 7.2 pounds. 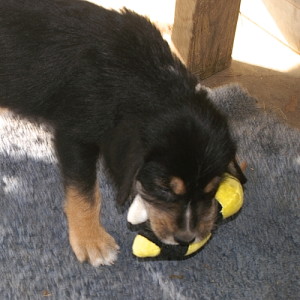 Dawn loves attention but on her terms. She will stand at the door to the whelping box and cry to go out and potty being sure to get some attention at the same time. She is outgoing and loves playing with the bees and hive from the Hide A Bee. She not only looks the biggest female but at 9.1 is the biggest. 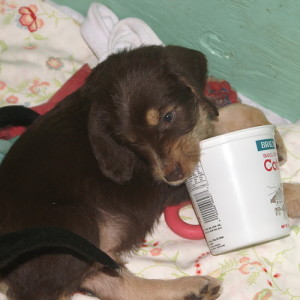 Dillon likes playing with toys. While the Hide A Bee was fun he has just as much fun with empty dairy containers. He can be the most vocal of the lot. When you go to check on him he looks at you like “what?” He figured out how to escape from the kitchen and wandered around under the table. He was 8.3 pounds. 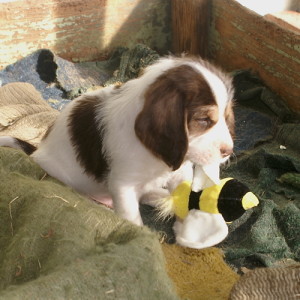 Damon still keeps to himself a lot but will assert himself when he wants. He really got into playing with the Hide A Bee and claimed one for his own. His coat is longer than most of the others and his nose still has a pink spot. His ears are very long and hang well. He was also 8.3 pounds.