B Litter is 3 weeks old
It’s been three weeks since the puppies were born and things have been hectic around here. There have been a lot of firsts: steps, solid food, bath, etc. The pictures of the first steps are the first caught on camera not necessarily the very first.
Click the images to the right to see them larger or scroll down to read more! 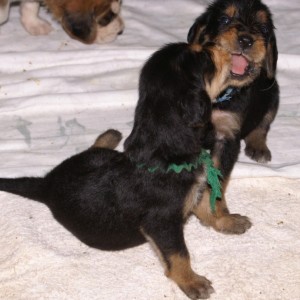 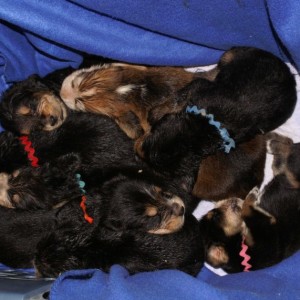 B Litter Otterhound Puppies After a Bath 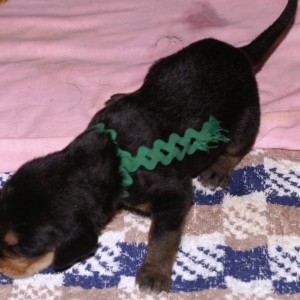 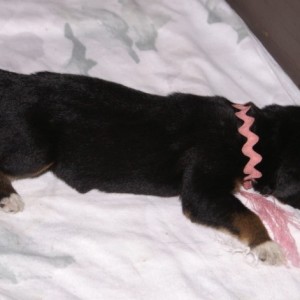 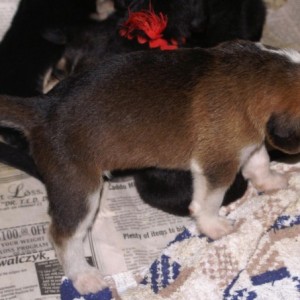 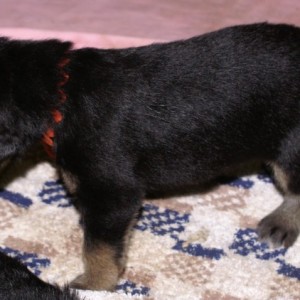 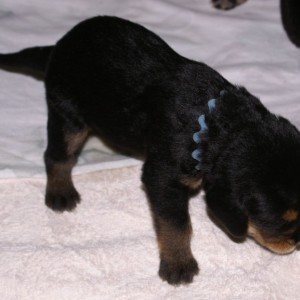 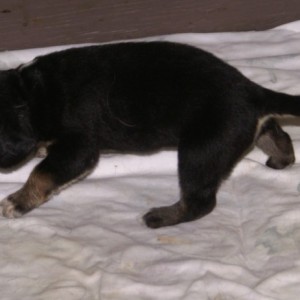 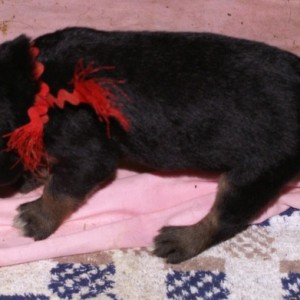 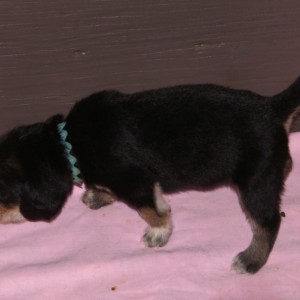 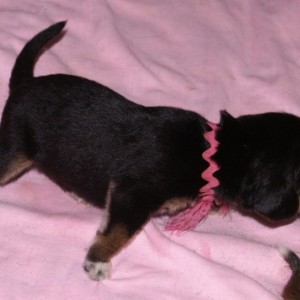 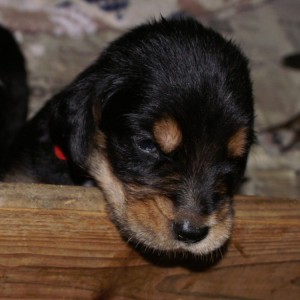 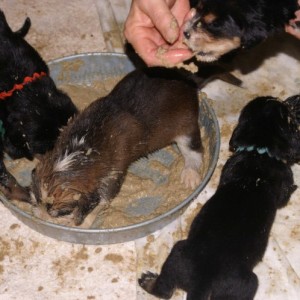 Green was actually caught making his first wobbly steps. The camera flashed a second before he landed on his seat. He is active and playing with his siblings. He is now 3.2 #. All the pups had to be bottle fed the first few days and Pink appears to have had a problem with the formula. A change in formula has resulted in an improvement in her growth. Because she is so small she can’t get through the crush to nurse and is still being bottle fed. She is very active and though wobbly has been up on her feet. She is now 1.6#. Brown is a big guy and always ready to eat. He was one of the first to stand and moves around fairly well. He has more white than the others with white on his face, neck, legs and stomach. He is now 3.8#. Orange is the largest at the moment. He and Brown alternate. He was slow to take to solid food and is unusually neat when eating. He is a bit vocal and restless after meals. He is now 3.9#. Blue was the first to stand and moves around well. She is one of the darkest in the litter with very little white. She plays with the others and she managed to follow her mom out of the whelping box. She is now 3.3#. Black is an active fellow and took to solid food. The white stripe on his neck makes him stand out even thought he has less white than some of the others. He moves around well. He is now 3.0#. Red is a bit chunkier than the others. He took to solid food well but tends to wind up wearing a lot. He is very vocal about being cleaned up after meals and protests being bathed. He is now 3.2#. When the solid food was introduced Turquoise wobbled over to the bowl and dove right in. He is a bit restless after meals probably because he eats too much. He is now 3.1#. Hot Pink also seems to had problems with the formula. She is still being bottle fed but seems to be taking well to the new formula and the more liquid portion of the solid food. She is very active and up on her feet and wobbling around. She is now 1.7#.. Here is a picture of the pups getting their first solid food. I started several by giving them a taste. Turquoise boy waddled over and started eating on his on. As you can see brown boy really got into it. Red ended up wearing most of his share. Even the little pink girl was eating it off my finger. All in all every one ended with a full tummy. After everyone had eaten their fill of their first meal they were sorely in need of a bath. Typical of little ones they did not like being bathed. Once dried they were put in their basket so the whelping box could be cleaned. Every one quickly curled up and went sound to sleep. One of the rails across the door of the whelping box was removed and Red found that it was just the right height to lean over and look out. Though he probably still can’t see more than shadows. They have reached the point where eating and sleeping don’t take up all their time. Here Green and Blue are playing.