The puppies are eleven weeks old now. They go in for their third set of shots on Sept. 16. We started taking them down to the pond with the big dogs and they love it. The first couple of times they stayed close but now they explore everywhere. They love the water and run along the bank in water up to their tummies. They are still eating three meals a day but have slowed up on the amount. We have begun putting collars on them and working with them on a leash. They will soon be going to their new homes. 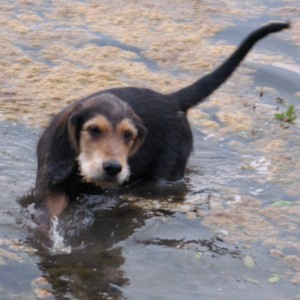 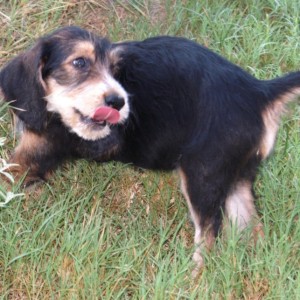 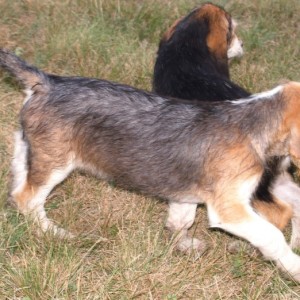 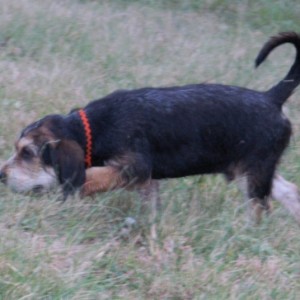 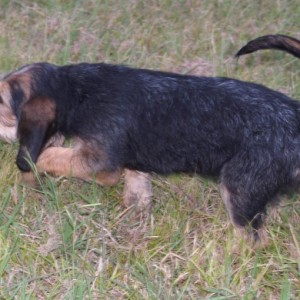 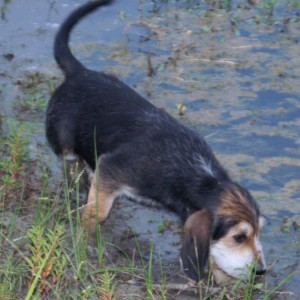 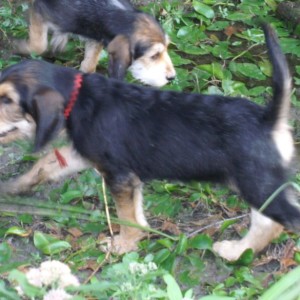 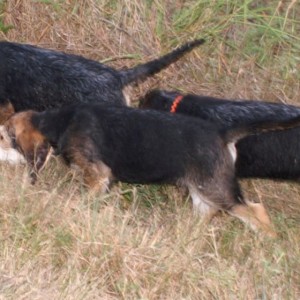 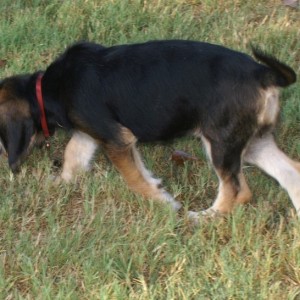 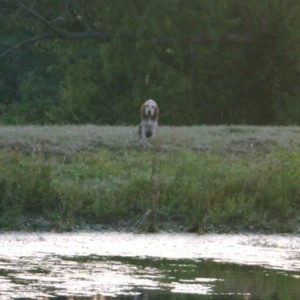 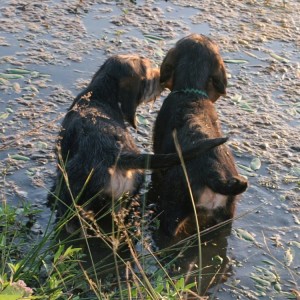 B Litter Otterhounds Dare you 9 5 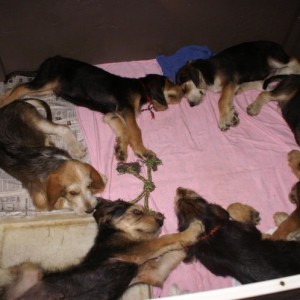 Booker loves the water. He followed his mom into the water and when it got over his head he just turned back toward shore. He didn’t get out but followed along in the shallow water. He is very friendly and eager for attention. He generally works well on the leash and comes to his name most of the time. He now weighs 26.7#. Blessing has been a real surprise the last 2 weeks. She is walking and standing much better. She runs all over the yard and plays with Blossom. She knows to stay away from some of the older dogs. She rushes to her bowl, eats her food and Blossom’s if we don’t watch her. She is still much smaller than the others and only weighs 16.4#. Badger likes running with the big dogs and isn’t afraid of the water but is not as interested in it as some. He is getting more coordinated as he grows. He is friendly and likes attention. He sometimes works well on the leash and sometimes refuses to move except to come to his name. He now weighs 27.5#. Barclay is still something of a loner but likes attention. He likes going to the pond and is a hunter. He checks out everything. Sometimes he is so calm and at other times he asserts himself. He does well on the leash and comes to his name. He looks like he will do well in the show ring. He now weighs 27.6#. Bonney still holds her own against her brothers and tends to hog one of the food dishes. She loves the water and didn’t hesitate when she saw the pond. She has more grizzling than the others giving her an unusual coloration. She can be aggressive one minute and all sweetness the next. She now weighs 25.4#. Bishop is an attention hound. He loves attention and likes to be cuddled. The drawback to that is he is growing fast and is already an armful. He loves exploring and wanders off on his own to check things out. He works well on the leash and comes when called. He now weighs 24.5#. Bexar is very lively and loves the pond. It was hard to catch him still enough for a picture. Here he is wading in the plants and mud at the edge of the pond. He loves to go but will rush up to you for a quick kiss before he is off again. He follows well on the leash most of the time and comes quickly to his name. He now weighs 25.7# Briscoe loves attention but also likes to explore. He was in and out of the tall grass at the edge of the pond so it was hard to get a clear picture of him. Here he, Bonney and Barclay hunt along the fence following the scent of the older dogs. He can do well on the leash but prefers to go his own way so will need a firm hand. He responds well to his name. He now weighs 24.7#. Blossom is a lively little girl and once outside wanders all over the place. She makes a regular nuisance of herself with the older dogs and doesn’t seem to get the idea that they don’t like her. She will pick a fight with her bigger brothers and then holler for help. She is still much smaller and only weighs 17.7#. Bonney (left) and Booker (right) stand chest deep in the pond looking out to where one of the adult Otterhounds is standing. Bonney seems to be daring Booker to go out there

Master of all he surveys Badger sits on top of the dam looking across the water at us. After a romp in the yard the puppies went down to the pond. They spent nearly an hour playing in and around the pond. After a late supper they were ready for bed. Clockwise from bottom left – Bonney, Badger, Bexar, Briscoe, Bishop, Booker and Barclay.