On August 22 the Hunter I Otterhound litter was nine weeks old. They are mostly housebroken. They still get up around 5 AM to go outside to potty and they prefer to stay out and play.

They are getting fed three times a day. Feeding starts with a pan of water with a spoonful of yogurt mixed in. Then around 6 to 6:30 they get their first solid food. Sometime between 11 and 2 depending on when they wake up they get their second feeding. Around 7 they get their third feeding. Currently they get somewhere between 2 ½ to 3 cups divided into three feedings.

This week the Hunter Otterhound pups began spending more time outside due to cooler temperatures. They also got their first introduction to rain. In true Otterhound fashion they just ignored the rain and enjoyed being cool.

Later in the week they were allowed to run around in the main yard while the older dogs were in the house. Run around they did to the point that pictures were next to impossible.

It didn’t take them long to discover the mud. After playing in the mud they had a quick bath. Playing in the water and mud is one thing getting a bath is another. The first is enjoyable the second torture. 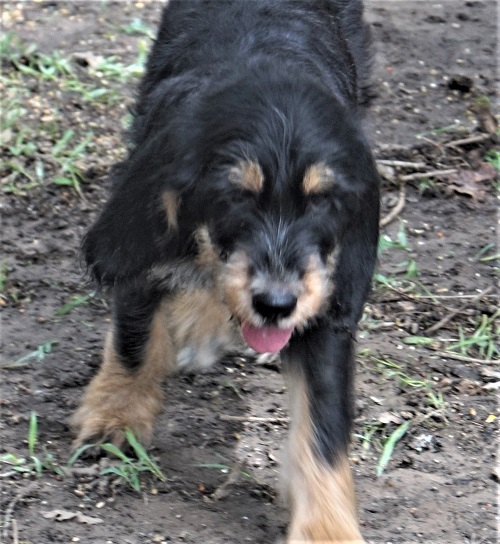 Hunter’s Ida Midnight Roamer weighed 16.6 pounds on August 22. She loves getting out and exploring the yard. She is good about coming when called once you get her attention. While she is still not great with cuddling she does like attention. She likes to have her ears rubbed. 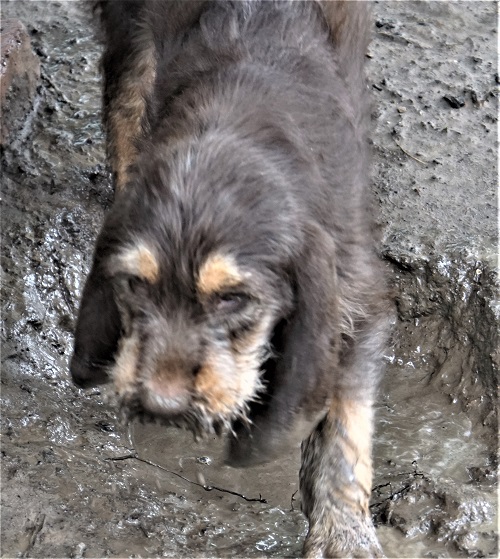 Hunter’s Iris Spring Harvest weighed 14.2 pounds on August 22. She can’t wait to get out. The more room to run the better. She is into everything. She no longer likes to cuddle and fights to get down and run. She does like to have her ears rubbed and will hold still for a few moments for that.