On August 8 the Hunter I litter was seven weeks old.

The weather has continued hot so the Hunter Otterhound girls are limited in the time they spend outside, During the heat of the day they only go out long enough to potty. However early mornings and late evenings they get to stay out for extended periods.

They are mostly housebroken and have not even wet the bed in a couple of days. That is except for dumping their water dish. They cry to go out when they need to go. This includes a couple of times during the night.

Their day begins around 5 AM when they cry to go out and are ready for breakfast. They go out to do their business while I fix their breakfast around 6. They have a bowl of milk replacer with some yogurt added and the first of their bowls of kibble. Once they eat they play until around 7 when I put them back in the whelping box.

They get up again around 9:30 and go out. Sometime between 10 and 11 they get their second breakfast. Shortly after that, as it is getting too hot, they go back into the whelping box. They spend most of the day sleeping during the heat (like the big dogs) with a brief break for doing business and their third meal in late afternoon. Once it cools in the evening they go out again. They have a late fourth meal and romp just before bedtime around 9:30. 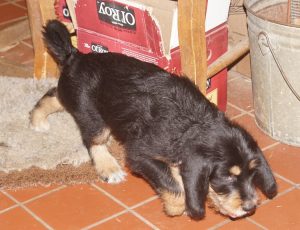 Hunter’s Ida Midnight Roamer weighed 12.8 pounds on August 8. She is lively and friendly. She responds to her name most of the time and will come running when you get her attention. She loves exploring the house and playing with their toys. 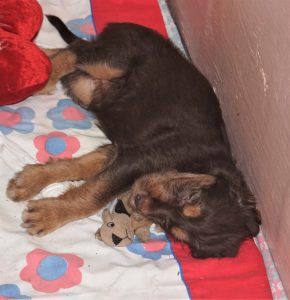 Hunter’s Iris Spring Harvest weighed 10.6 pounds on August 8. She is full of energy and not afraid to take off on her own. She pretty much ignores you when you call her and has to be chased down. When she needs (or wants) out she can be quite vocal. 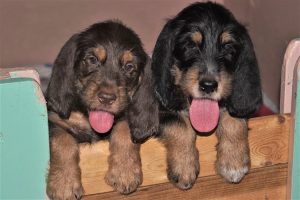