The Otterhound Girls from Hunter I Litter were six weeks old on August 1 They are growing fast. They have learned to cry when they need to go outside to potty. Once outside they quickly potty. They haven’t messed in their bed in over a week but are still wetting the bed. They pull up the wee wee pad and play with it and wet the bed.

They are going out several times a day but can’t stay out long due to the temperatures being around 100.

The Otterhound Girls I litter get up needing to go out a couple of times at night. They enjoy going out after dark because it is cooler and they like to play once they have taken care of business.

Since it is too hot for the Otterhound pups to play outside except after dark we have started letting them loose in the house when the big dogs are outside. This gives them a chance to exercise without over heating. The pups love racing around the house exploring everything. They have checked out the big dogs kennels and all the beds.

They have begun playing with boxes and also discovered chews. The chews are great on their sore gums where they are cutting teeth. They get kibble three times a day and a morning bowl of milk replacer.

The dogs generally have a sing around four in the morning and a couple of mornings Ida and Iris have joined in with their little voices.

Hunter’s Ida Midnight Roamer weighed 10.3 pounds on August 1. Ida has become more interested in human contact but still doesn’t like to cuddle. When they are running around the house she rushes up to get attention but runs off if you try to cuddle her. She is really into chewing on the chews and ran around the house with one. She still likes to pull up the bedding and sleep on the mat beneath. 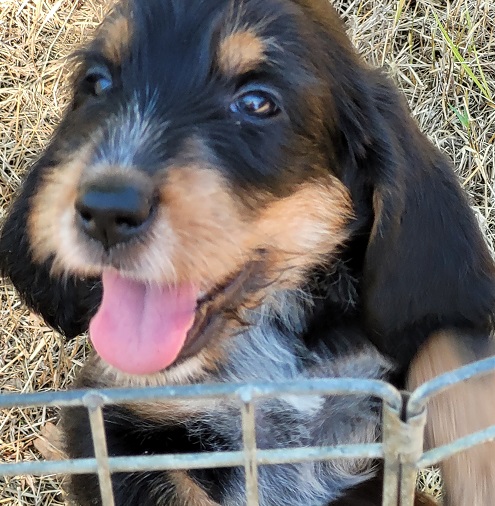 Hunter’s Iris Spring Harvest weighed 8.4 pounds on August 1. She is gaining well just not as fast as Ida. She really loves running around either outside or in the house. She will stay outside longer than Ida perhaps because her liver coat doesn’t get as hot as Ida’s black. She was the first to cry to go out to potty and has been very good about letting us know when she needs to go. 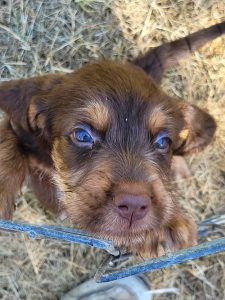 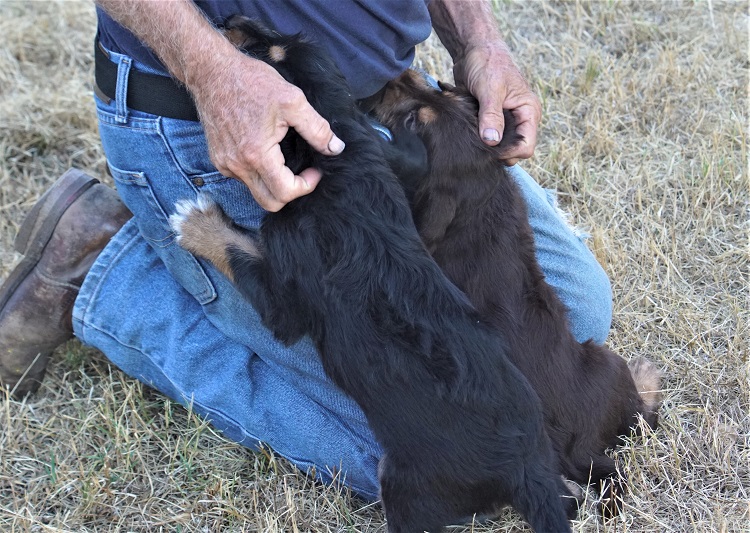