November was a good month even though we only went to one show. We went to the Cen-Tex KC show on Nov. 22 and 23. There were four girls entered – Pris, Quick, Star and Abby (Abilene’s mom) – and Houston (Star’s dad). Quick took Winners Bitch and Best of Opposite while Houston took Best of Breed on the 22. That gave Houston his second major. On the 23 Pris took Winners Bitch and Best of Opposite giving her the major she needed for her Championship. Houston again took Best of Breed giving him the final points he needed for his Championship. That gave us two new Otterhound Champions for the weekend.

After the show the girls clowned around for their Christmas pictures. I had hoped to get it posted before now so they could wish you a Merry Christmas but I had problems getting the website up dated. So we will wish you a Happy New Year instead. 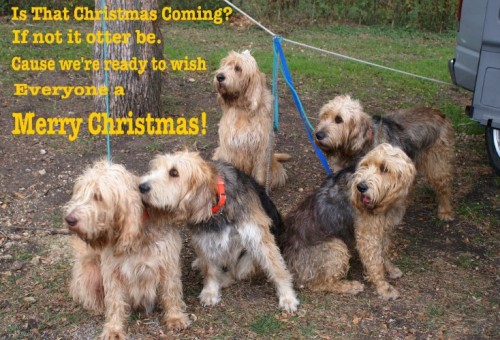