The Hunter I litter of Otterhound Girls was eleven weeks old on September 5. They still get up around 5 am but sleep through the night.

We have been working with them on come and sit but it is still hit or miss. They have gotten used to their collars so we moved on to working on leash. Sadly that didn’t go as well as wearing a collar. As long as we went where the Otterhound girls wanted to go, that was fine but when we tried to lead them the girls rebelled. It will take a lot more work.

They get really excited when they see us coming especially if we have their food. They jump up on the pen in their eagerness. Part of the pen included a two foot high section to make it easier to put them in and take them out. This week in their eagerness they managed to climb or fall out. That meant we had to replace the two foot section of the pen with a taller section.

Once the big dogs have finished supper and come in the I Otterhound girls get to run free in the main yard. As the big dogs have gotten used to the pups more of the adult dogs will spend time in the yard with them. However only Happy is willing to stay out with them until they go out front at dark to have a calming down period.

Hunter’s Ida Midnight Roamer weighed 21.9 pounds on September 5. She is always eager to go and tends to stand on Iris to ensure that she is the first one picked up. She was so eager to get out that she jumped up on the two foot section of pen and managed to put her foot in the wire and climb out. Once out we had to chase her down. When we worked with her on leash she managed to pull out of her harness and took off again. 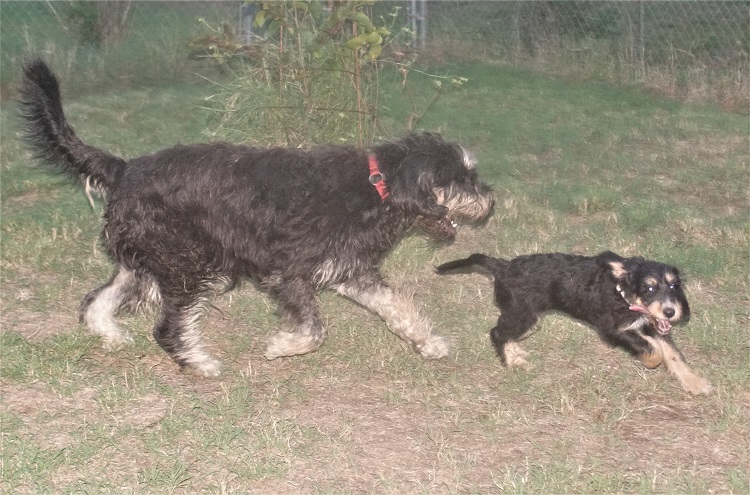 Hunter’s Iris Spring Harvest weighed 18.6 pounds on September 5. While Ida tries to push her aside she comes back in a flash wanting out. She did better on leash than Ida but that could be because her harness fit better. They were really eager for breakfast and were jumping on the pen while I went to get their breakfast. When I came out the door there was Iris at the door waiting for her breakfast. 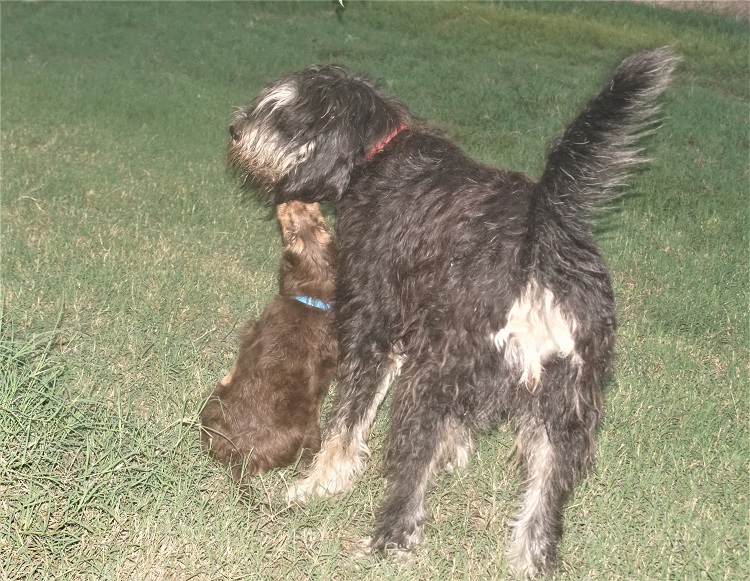